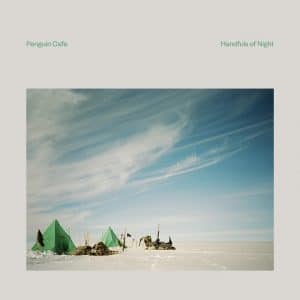 Penguin Cafe frontman Arthur Jeffes is no stranger to ambitious ideas when it comes to making music. Second album The Red Book featured two songs inspired by the NASA Kepler mission of 2013 that were subsequently beamed into space and 2017’s The Imperfect Sea saw the band cover tracks by electronic acts like Kraftwerk and Simian Mobile Disco, giving them a contemporary classical makeover in the process.

The inspirations behind much of fourth album Handfuls Of Night are arguably his most laudable to date. It was partly created in response to a commission from Greenpeace for him to write pieces of music to help raise awareness for certain endangered species of penguin. Given his (and his family’s) longstanding connection to the animal it feels a perfect fit. Jeffes has spoken about how he “envisaged a whole anthropomorphised world, where these penguins had narratives and adventures that we soundtracked” and the end result is an exquisitely refined and finessed album that progresses the Penguin Cafe sound without sacrificing any identity.

Winter Sun acts as something of a scene setter for the album, establishing the strings-based sound that shapes the album. Chinstrap elevates it to the next level, a soaring track reminiscent of acclaimed film composer Alexandre Desplat (there’s also something implacably Penguin Cafe about a track named Chinstrap). It’s followed by the circular patterns and chord changes of Chapter which have a subtle drama and suspense to them and collectively this opening trio proves that on this release they’re more cinematic than they’ve ever been. Adelie meanwhile sees double bass tumble elastically through the strings.

At The Top Of The Hill, The Stood may initially just seem to be a simple, slight run of piano arpeggios with some melodica laid on top but over time becomes infused with emotion and depth. In short, it’s one of their most impeccable moments to date. Pythagoras On The Line Again is as experimental as they get on this outing, being centred around another telephone sample. Among the refinement and modest evolution, it’s a connection to the past, a reminder of the backstory of Penguin Cafe Orchestra, Jeffes’ father’s band (the track is an expansive play on the track of the same name that appeared on the last Penguin Cafe Orchestra album Union Cafe).

The closing stages see them further settle comfortably into the surroundings of their Erased Tapes label. With strings and piano outdoing any quirks or idiosyncrasies of previous albums they’ve never sounded closer to the likes of Ólafur Arnalds, and Nils Frahm. Yet, there’s still a distinct Penguin Cafe magic to Handfuls Of Night. The music here won’t come as a surprise to people familiar with their increasingly tightly managed aesthetic but it still provides a wonderfully calming sanctuary to temporarily get lost in.