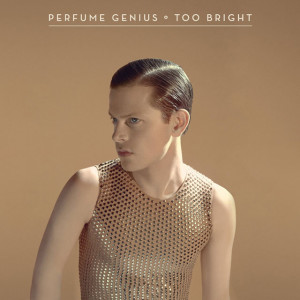 “No family is safe/When I sashay,” proclaims Mike Hadreas on Queen, the lead single from his truly excellent third album. For fans of Perfume Genius, it’s safe to say that they weren’t expecting such a confident and bold comeback tune.

It’s certainly a stark change from the sparse ballads that got him this far in the first place. His first two full-length releases, Learning and Put Your Back N 2 It, are full of devastating stories wrapped up in serene and graceful arrangements, whilst his vocals are simultaneously beautiful and haunting. The darkness is still there on Too Bright but it’s a far more threatening, diverse and direct set of songs; it’s a stylistic gamble but one that pays off handsomely.

However, it opens with a red herring. I Decline, all mournful and downbeat, sounds like it was left on the cutting room floor during sessions for his last outing. In the end, that doesn’t seem to matter too much since Hadreas’ emotional pull is very hard to resist and the song ends up being an understated thing of beauty. It’s one of the most intimate-sounding pieces of music he’s ever recorded and, given what’s to come, it’s a bold way to kick off Too Bright.

The remaining 10 tracks range from sparse and accessible to piercing and bordering on avant-garde. To illustrate these extremes, contrast I’m A Mother with Don’t Let Them In. The former takes the sadness to much darker territory; Hadreas’ voice is drenched in effects to the point where his trademark quiver is barely recognisble and the musical accompaniment is nothing more than ominous low-end synth chord progressions. The latter is quieter but just as enticing thanks to its lusciously dreamy aesthetic. The record regularly goes back and forth on these dynamics and the fact that the end result isn’t jarring at all, mainly down to the sheer quality of the songwriting.

Some of Hadreas’ best material to date is to be found on this album. Queen is fearless and defiant – an ideal first single – whilst Longpig is driven by synth lines that circle around and overlap one another to produce something utterly intoxicating. The unsettling yelps and screams in Grid make for a song that’s just as haunting as anything from Learning.

Fool is the standout though, since it wonderfully combines the shifting dynamics of the album in four woozy minutes. Starting out as a steady and strident soul number, it then veers in a more ethereal direction before returning to finger clicks and gospel backing vocals without batting an eyelid.

Frequent collaborator John Parish and Portishead‘s Adrian Utley assisted Hadreas in the making of Too Bright and many people will point towards the involvement of the latter as a key factor in some of the more outwardly menacing moments. Admittedly, there are a couple of tracks that wouldn’t necessarily sound out of place on Portishead’s most recent LP. However, look a little deeper and that theory doesn’t quite hold up. Vitriol, perhaps very understated, hasn’t really been absent from his work thus far – for example, All Waters from Put Your Back N 2 It is equal parts heartbroken and frustrated – but this time around it’s harder to avoid. Grid, Queen and My Body are indeed more electronic and dense; there’s also a tonne of pent-up anger.

Ultimately, it’s the rage that makes Too Bright so fantastic. It is still very much a Perfume Genius record – just like its predecessors, its running time is a concise half-an-hour, and high on emotion as ever – but one that is more willing to play with listener’s expectations and demands you to return to the start as soon as the last notes of All Along fade away. It’s also a remarkable balancing act between songs that are comfortingly familiar and unsettlingly unfamiliar. It’s not the easiest of pop albums to listen to but its raw power makes it a dazzling triumph.