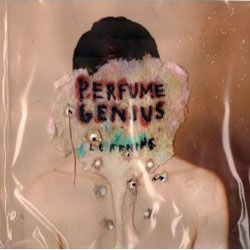 Little is known about what caused 26-year-old Mike Hadreas, aka Perfume Genius, to leave New York and head back to Seattle to live with his mum. But his debut album, Learning, gives a fair indication that his experiences were pretty bleak. Learning is an unremittingly sad record, one that almost suffocates the listener with its own melancholia; and yet there’s also something strangely inspirational in its 10 piano-led hymns to failing and trying again.

Recorded in his mother’s house and sounding as intimate as taking a sneaky peek at someone’s diary entries, it’s an album that feels crushingly personal. Hadreas’ vocals – a mix of Sufjan Stevens‘ fragility and Neil Young‘s crumpled croon – are either painfully exposed, as on the haunting Mr Petersen, or drawn out into a terrifying howl, as on Gay Angels. Thankfully, the simple piano and keyboard arrangements carry a lightness of touch that stops the whole thing from collapsing under its own melancholic weight. Opener Learning, for example, features simple chords augmented by relatively flashy piano flourishes, whilst Lookout, Lookout adds layered backing vocals to the mix for extra depth of sound.

In fact any extra sounds that add flesh to these bare bones come as light relief. Whilst it’s unfair to say that these are sketches of songs – they’ve clearly been a labour of love for Hadreas during his darker moments – some of them carry only the merest hint of structure. The aforementioned Gay Angels introduces a constant, one-note synth that’s joined by a ghostly, distant-sounding Hadreas, whose multi-tracked vocals become a swirl of noise as the song progresses.

Musically the palette is rather monochrome and lyrically Hadreas employs a similar technique of less is more. Recent single and album highlight Mr Petersen tells the story of a relationship with an older teacher: “He let me smoke weed in his truck / If I could convince him I loved him enough”, before introducing a sudden denouement: “When I was 16 / He jumped off a building”. As that last line is uttered, the recurring piano riff falters slightly, slowing down before building back up, as if Hadreas paused at the memory.

It’s one of many beautiful moments on an album that needs to be listened to intently and as a whole. Learning won’t be a record that you turn to everyday – and if you do, can we suggest a visit to your doctor – but it’s a piece of work that you will go back to in years to come and enjoy in a way that may not be immediately obvious, nor even on the hundredth listen.