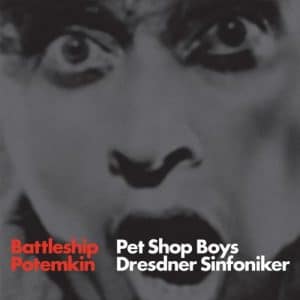 You could say that Neil Tennant and Chris Lowe are now living out their dream. As far as chart success goes, Pet Shop Boys may be past their best, but anyone who read Smash Hits in the late ’80s will know that Neil and Chris hankered after a life behind the scenes.

While I only partially bought this (their live shows are surely enough to prove that there’s nothing they love more than hamming it up on stage) it’s an aspiration which can only serve to prolong their already extensive shelf life.

And indeed, a wise move. Thanks to the PSB’s integration of arthouse with their erudite pop sensibilities, it’s less surprising than it should be that chart-topping ’80s popsters are the choice composer of original music for Eisenstein’s classic film Battleship Potemkin.

The film, made in 1925, depicts the 1905 mutiny on the battleship Potemkin and subsequent events which formed part of Russia’s revolution. Banned in Britain until 1954, it has since become a highly-praised cult classic. It had its own score but apparently Eisenstein hoped a new soundtrack would be written for each new decade.

So representing the noughties, we have the Tennant/Lowe interpretation of the film. Commissioned by the Institute of Contemporary Arts, the soundtrack premiered almost a year ago in Trafalgar Square accompanied by the Dresden Sinfoniker.

While it’s hard to say from the soundtrack alone how well it compliments the film, the music is certainly strong enough to stand up without visual aid. Many tracks see the traditionally lush Tennant/Lowe sound stripped right back to simple, electronic motifs. Yes there is an orchestra present, but the influence of electronica is far more prevalent throughout the soundtrack.

The opening bars of first track Comrades! are reminiscent of Walter Carlos‘s interpretation of Ode To Joy on the A Clockwork Orange soundtrack. Men And Maggots could be Kraftwerk. Drama in the Harbour sounds like the theme tune to a noughties kids sci-fi series (the one I had particularly in mind was The Tripods but that’s a little obscure).

That said, this soundtrack is made by the same pair who did It’s A Sin and Go West and there are times when you can’t mistake the classic PSB sound, especially when Neil Tennant starts singing (Our Daily Bread, NoTime for Tears) or they start getting housey (Nyet, After All – c’mon boys, this is the noughties not the ’80s!).

Unsurprisingly, being one who prefers Krautrock to disco, I much preferred the minimalist electronica approach to the pumping house, which makes this album something of a patchy affair. Pure PSB fans may find the same result, albeit for opposing reasons. I’m not convinced the final product makes an enduring soundtrack to this film, but unless someone makes another one for the 2010s, who’s to say what might happen?