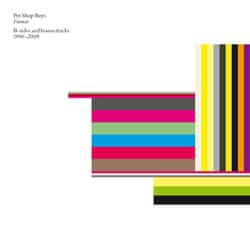 A collection of B-sides seems a rather anachronistic concept these days. After all, CD singles hardly exist any more, much less a B-side. The days of going to a record shop (ask your parents) and coming away with a selection of 12″ singles (ask your parents again) is very much a thing of the past.

Yet over a career of almost 30 years, Pet Shop Boys have always treated the noble concept of the B-side with particular love and attention. Rather like Oasis – albeit on the polar opposite of the musical scale – most of their extra tracks have been far from throwaway, often standing up to the best of their many singles.

They’ve been here before of course – 1995’s Alternative collated all of the duo’s B-side from 1984 through to 1994. So, Format effectively picks up from where Alternative left off: two discs of 38 tracks, spanning from 1996’s The Truck Driver And His Mate right up to 2009’s Up And Down. In between, there’s all many of curiosities, including a duet with Elton John, a demo especially recorded for Tina Turner, and the My Robot Friend song later covered by Robbie Williams on his ill-fated Rudebox album, We’re The Pet Shop Boys.

An exhaustive collection then, and at over two and a half hours long, one that’s likely to only be fully listened to by hardcore Pet Shop Boy fans. That’s no reflection on the quality of the songs gathered together here though – indeed, it’s striking to see how little filler there is here, although by its very nature Format doesn’t quite have the necessary flow that a successful album has.

The first disc leans heavily on the Bilingual era, with The Truck Driver And His Mate kicking things off. This really is the quintessential PSB song, a disco stomper about a gay truck driver “acting out of compulsion, after hours sitting in the van”. Although a remix of the band’s first ever B-side, In The Night, seems a bit superflous, we do get a superb new version of Discoteca and the brilliantly arch How I Learned To Hate Rock N Roll.

The tracks from the Nightlife period are probably the most explicitly club-orientated songs – the instrumental Catching A Shadow and Lies (featuring the deadpan tones of Chris Lowe on vocals) are full-on disco floor-fillers. Although they’re not the most memorable tracks here, we are treated to the gloriously silly Sexy Northener, which is almost worth the price of the album on its own.

The second disc is a bit more down-beat and melancholy than the first one, reflecting the duo’s commercial slump around the early part of the last decade. There are still some treasures to be found though, especially the poignantly sad Always and the dramatic, atmospheric Friendly fires. Sadly, there’s a fair amount of anonymous, ordinary stuff from the Release period, such as Searching For The Face Of Jesus.

The appearance of the mind-bendingly meta We’re The Pet Shop Boys is a treat though – this was, of course, originally by the little-known My Robot Friend, and then covered by the duo as the B-side to the Miracle single. It’s beautifully daft hearing Tennant sing someone else’s lyrics based on his own song titles, and it genuinely does sound like a Tennant/Lowe original.

In Private has a gorgeously soaring chorus, but is rather ruined by Elton John’s melodramatic vocals, although I Didn’t Get Where I Am Today is excellent, and its a mystery to ponder why it was suddenly pulled from the original version of Release.

Their commercial renaissance was signalled by 2009’s Yes album, and therefore the album ends on a confident note, with The Former Enfant Terrible and Up And Down sounding impossibly fresh. They conclude a fine overview of nearly 15 years worth of clever, intelligent pop music that’s far too good to be consigned to B-side status.