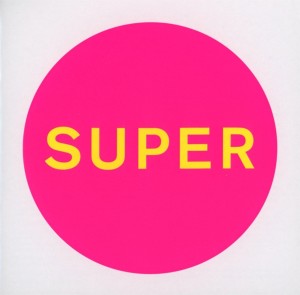 Reaching a significant birthday can often prompt great tides of nostalgia. Pet Shop Boys, 30 years old as a pop duo, have had that experience – but on the evidence of Super the anniversary looks set to be a wholly positive one. For now, alongside their success in pop music, Neil Tennant and Chris Lowe are a multimedia, multicultural concern, capable of turning their hands to classical music, ballet, the musical – as well as early 1990s British house music.

They are not alone in this of course, as pop music has a quiet obsession with the early 1990s at the moment – the recent Primal Scream and New Order output confirms this – but Lowe and Tennant have used their rose-tinted spectacles to advance their own sound, hooking up again with Stuart Price to supply extra production power.

“It’s a long way to happiness, a long way to go, but I’m gonna get there boy, the only way I know,” sings Tennant in the chorus of the upbeat Happiness, with a surprisingly carefree vocal loop. From there the tone for Super is set, allowing for occasional outbursts such as Pazzo, where words are almost secondary to the music.

The early house references reach a peak with The Pop Kids, which as always tells a story amidst the floor-filling production. Musically it is a cross between Bizarre Inc’s Playing With Knives and the lovelorn Electronic song Disappointed – a winning and thrilling match. It is tempting to think the story is autobiographical, but in reality Tennant and Lowe are recounting a tale of a friend of Neil’s who spent his university days in clubs.

Inner Sanctum brings in elements of Moby’s Go and Energy 52’s Café Del Mar to uplifting effect, and will surely be thrilling when staged at the Royal Opera House in July, while on the other side Twenty-something brings a bit of bossa nova to the game, an exotic expansion on one of those rhythmic loops you get from pressing a single finger on the keyboard. On closer inspection it is a cleverly layered examination of the trials and tribulations in modern London life, a kind of midlife crisis experienced early. “Sometimes it’s hard, day to day, to pay your way”, observes Tennant, then later, “take your smart phone, make your way home on your own”. He identifies with the virtual playground that is social media. “Will your ideas ever trend? You’re twenty-something, feel the heat!”

Along with the elegiac Sad Robot World, this is the darker underbelly balancing Happiness into a satisfying whole. The Dictator Decides sits here as well, its regimental march superseded by a chord sequence of melting nostalgia, at which point Tennant enters stage right. His observation that “If you get rid of me we can all be free” – the dictator’s get-out clause – is followed by a floated and rather eerie vocal from afar. It is a haunting track, the darkness at Super’s core, prompting thoughts of North Korea and Zimbabwe to mention just two.

Super, as you will have gathered, is both old and new. It is old in the sense that all the Pet Shop Boys’ calling cards are here – the vocal clarity, the production precision, the wry observations on daytime ordinariness and night time escapism. Yet the nostalgia trip is a good move, with Price giving their beats a firmer kick. The resultant punches could easily hold their own when going 12 rounds with any so-called EDM competitors, some of whom – Avicii for instance – have already thrown in the live towel.

There is no chance of Pet Shop Boys doing that in the foreseeable future. Even as they enter a fourth decade their music has an awful lot to say, and is finding increasingly enjoyable ways of saying it.