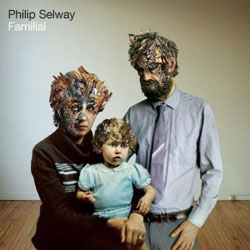 In the long-established career of Radiohead, the Oxford group’s members have also dabbled in collaborations and solo output. Jonny Greenwood has had perhaps the most critically acclaimed and rewarding time of it, composing film soundtracks (including his outstanding award-winning score for the equally outstanding opus There Will Be Blood), while Thom Yorke released The Eraser in 2006, which allowed him to pay tribute to all things related to the Warp back catalogue in an album based around beats and synths.

With the band mid-way through recording their eighth, the time is just about right for drummer Philip Selway to enter the fray with Familial, his solo debut – and with his full given first name. No one, including himself, knew that he could sing until he took part in Neil Finn‘s 7 Worlds Collide project in late 2008 when he contributed two original recordings (The Ties That Bind Us and The Witching Hour). Spurred on by his successes there, he encouraged himself to get down to recording a full-length LP alongside Glenn Kotche and Pat Sansone from Wilco, Sebastian Steinberg from Soul Coughing, and Lisa Germano.

The result is an album that, unsurprisingly for something released on Bella Union, is incredibly folky and intimate. And Selway can sing. In songs like Beyond Reason his rasping vocals echo that of a gentler, softer Jeff Tweedy. Because of the clarity of his voice, his lyrics are striking and reveal an interesting portrait of himself and his own life as he reaches middle age. The lyrics of Patron Saint sound extremely personal and culminate with a stark couplet: “The lights are burning bright/But no one’s home./” Broken Promises is a maudlin attempt to move on from feelings of hurt and sadness (“Look up at my face/And you’ll see peace for the very first time”), and the gorgeous Don’t Look Down is looking fear head on and attempting to conquer it (“Silence the voice in your head/Some things are better left unsaid”).

The only real problem with Familial is that, as a whole, it feels rather samey and familiar (no pun intended); it would have been interesting to see a mix of dynamics. Also, compared with other Radiohead side-projects (which is extremely unfair but it really can’t be helped) it doesn’t have the same replay factor that his bandmates achieved. That isn’t to say, however, that the songs are not well composed – Falling, for example, is a beautifully fragile piece. Besides, these are flaws that, in the grander scheme of things, are minor.

Familial is a solo album that has qualities you might not have expected to begin with: vivid, memorable lyrics that describe a variety of emotions, its incredibly soft arrangements and, of course, the fact that he can actually sing, proving wrong the famous ‘drummers are not frontmen’ rock’n’roll myth in the process. It sounds like a record that Selway needed to make as part of a healing process. This brave album will entice Radiohead die-hards, but it should also bring its creator an entirely new audience as he steps momentarily into the spotlight.