Phoebe Bridgers – Stranger In The Alps 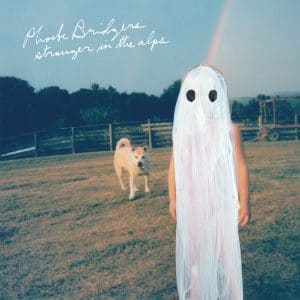 There’s nothing like a bit of pressure on a young artist. Phoebe Bridgers is a 23 year old LA-based songwriter who early collaborator Ryan Adams has already compared to Bob Dylan and while that’s undoubtedly hyperbole at the moment, Stranger In The Alps is certainly one of those records that seem destined to herald a long-lasting career.

There’s a ghostly quality from the opening note of Smoke Signals which grabs the attention straight from the start. Like many of Bridgers’ songs, it’s a hushed, contemplative ballad with the singer’s world-weary voice reflecting on the deaths of David Bowie and Lemmy, before namechecking The Smiths song How Soon Is Now. It’s the sort of song that pulls you into an album and demands, in its own very quiet way, that you hear some more.

It’s clear that Bridgers is one of those songwriters who can tell a story with just a couple of lines. In her breakthrough song Killer, she tells of how she scared her lover, “even scared myself by talking about Dahmer on your couch”. Funeral opens with the stark lines of “I’m singing at a funeral tomorrow, for a kid a year older than me” while Demi Moore may be named after the film star but is more a tale about yearning for connection, even if that’s through sexting (“take a dirty picture babe, I can’t sleep and I miss your face”).

it’s undeniable that there’s a huge sense of sadness and loss hanging over Stranger In The Alps. The aforementioned Killer even imagines her own death, “when a machine keeps me alive and I’m losing all my hair”, while there’s more than a few nods to the late Elliott Smith, especially on tracks like Scott Street. Yet it never feels depressing – this is a wallow in the very best way, and one with a self-knowing humour underpinning everything, as the final lines of Demi Moore prove: “I’ve got a good feeling, it doesn’t happen very often.”

As befits songs of mortality, yearning and loss, the tempo never really rises above a mild trot, with just the catchy chorus and crunchy guitar on Motion Sickness hinting at it being a breakthrough hit. Yet the downbeat atmosphere and fragile arrangements only serve to accentuate Bridgers’ strong, distinctive voice. She blends perfectly with sometimes touring partner Conor Oberst, who pops up to lend his vocals to the excellent Would You Rather.

It’s appropriate that Oberst should make an appearance, as much of Stranger In The Alps harks back to the Saddle Creek roster of bands such as Azure Ray or Rilo Kiley (the fact that Bridgers bears more than a slight vocal similarity to Jenny Lewis helps on this score too). It says a lot that she can casually end the record with a cover of Mark Kozelek‘s You Missed My Heart and make it sound like one of her own compositions.

There’s a line in Funeral that could be key to the whole album: “Jesus Christ, I’m so blue all the time, and that’s just how I feel, always have and I always will.” That may be true, but in this case, feeling blue never felt so good.