by Steve Hands
published: 15 May 2006 in Album Reviews
Tweet 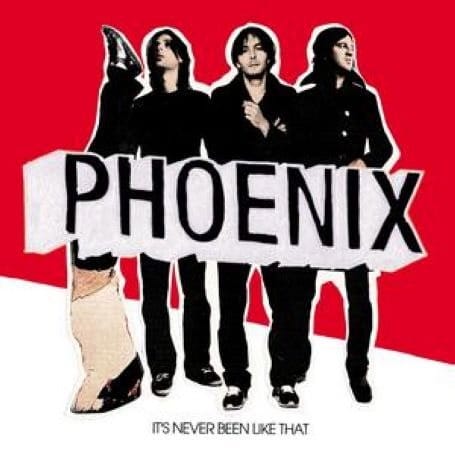 Calling any modern guitar band retro has about as much critical use as revealing that the humble oak is wood-derived. Requiring neither beetle-browed bark nor angst-ridden bite, Phoenix’s pastel-shaded pop-rock is perennially tagged with reviving a sleeve-rolled sheen stretching from Fleetwood Supertramps to R.E.O Miller Bands.

But listen close, and you’ll realise that it’s never really been like that. Honest. Just read the album title. See?

With Laurent Brancowitz and Christian Mazzalai fashioning Marr-esque ringing arpeggios and wood-panelled reverb, its even harder to nail down those review-filling antecedents. INBLT is a subtle change of direction that allows Phoenix-followers to keep the faith while taking newcomers into its ash-free wings. They might not enjoy the comparison, but this is a Phoenix a tad more Haircut 100 than Hall, and a lot more Orange Juice than Oates.

For their third album, the fashion-mag-perfect foursome have finally knocked out an album that just about makes listening to every track a worthwhile experience. And if it lacks anything as effortlessly crafted as If I Ever Feel Better or Everything Is Everything, Its Never Been Like That may be as even a piece of work as the Parisian quartet are ever likely to make.

Despite the odd spray of metallic hardness, the band’s dominant glow of pinky-blue optimism ridged by sundown shades of inky introspection remains. Sounding ever youthful, sanguine and affluent, the gloss of Phoenix promises that nothing’s going to touch you in these golden years. But even in summer, there does appear to be some shadows in the city.

As ruminative as the band allow themselves to be on the likes of One Time Too Many, Sometimes In The Fall and the instrumental North, Phoenix’s soul-searching nudges reflective but surely another girl, another planet does beckon.

As clean and deft as Brancowitz and Mazzalai’s lines are, the singular USP of Phoenix lies with the heart-nailed-on-sleeve pose and posture of the starry-monickered singer. Forever on the run from – or running after – his Venus, Mars manages to stuff every bar with enough wordage to burden an almanac.

Thomas Mars ain’t no schoolboy, but his shrug-shouldered romanticism lies fixed in the pop lexicon of first relationships ‘n’ stuff. Proving that he’s a learned scholar of the love-song, the ephemera goes hand-in-hand with elation, as found in Rally’s anguished cry of “Remember the time we talked about everlasting / don’t you know it falls apart”.

Mars’ rumoured dalliance with Sofia Coppola might even net the band some Heat space. It’s just a little too tempting not to read biographical detail into Mars’ true confessions. Napoleon Says burns with all the intensity that a kid brother version of Arcade Fire‘s Rebellion can muster. Though Mars still can’t quite negotiate indignation, the repost of lines like “I will be your Bonaparte” and “You want to be European” hints at a Francophile flipside to freedom fries and noodle-headed surrender-monkey taunts.

Single Long Distance Call is Phoenix par excellence. The dread rock-out parts of first album United now a thing of the past, Phoenix are most at home when ploughing layers of meaning into three-or-so minutes of pop innocence. Buoyed along by a series of thoughtful changes, Mars’ gloomy declaration of “I remember this young guy died / And I took his part”.

Its easy to reason why some find Phoenix to be so featherweight as to be intangible. But a credo based on lightness of being can be just as artistically credible as one based on abrasion and exploring the tumult of the soul. Its Never Been Like That may tip its jangly heart a little too close to Indiesville for comfort, but maybe its because Phoenix are a little too sensitive.