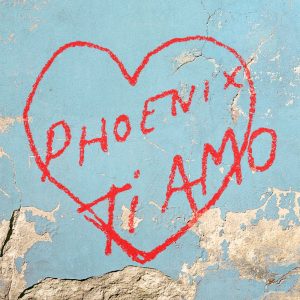 Imagine a French Scissor Sisters with a synth obsession. The bubbly flamboyance and occasional falsettos that made the American pop group famous are also primary attributes of Phoenix, who rose to prominence with smash hit single 1901, which was featured in a Cadillac advert. The inclusion of other songs in popular movies Lost in Translation and Shallow Hal, and Paramore covering Long Distance Call on French television, suggests that instead of the ill-fitting ‘rock band’ title they grant themselves, Phoenix are instead very accomplished at making pop songs.

That is indeed true of Ti Amo, the band’s sixth studio album. This jaunty, upbeat offering epitomises the performative youth and exuberance of the group, fronted by Thomas Mars. It would be apt as the soundtrack of a credit scene in The Inbetweeners, or to accompany an advert taking place on a summery day full of good times and beer. That is the image evoked by the album, which blends effectively into a complete piece instead of a compilation of singles.

J-Boy, the album’s lead single and opening track, opens with a techno-funk beat and a spangled melody. It is hook-heavy, the song consisting of a build-up to the chorus, then the chorus, then repeating this pattern until the end of the song. It isn’t particularly adventurous, but it’s catchy and pleasant to listen to. Keyboard and vocals are the mainstay of the track’s main sound, which remains the case for the titular Ti Amo. Despite a change in key and in tempo, the song seems to follow a similar blueprint, with a repetitive-sounding chorus the focus of a song that features a pop beat and keyboard sound effects that would be popular in a year 9 music lesson.

The same can be said of the jovial Tuttifrutti and the pretty Fior Di Latte. This becomes a pattern of the album; as each song ends, the sound fades into silence, before gradually beginning again as though nothing has changed. Single songs – Queen’s Bohemian Rhapsody, Green Day’s Homecoming – feature more jarring changes than Phoenix’s entire album. It is easy to single out songs such as Telefono, which in isolation is representative of everything the album is about. But it does not stand out, even if for each minute on the album there are seven hours of material behind the scenes. The juxtaposition between such an effortless, light and fun sound, and the slog it took to perfect this aural easiness, is effective in creating the intended sound. Phoenix have arrived at a formula that works – the correct keyboard sound, tempo structure required to make a successful song – and then stuck religiously by this method for the entire 36 minutes of the album. This is not necessarily a bad thing, as the album is very enjoyable, but it does make it difficult to distinguish between songs at times.

While the lyrics are mostly in English, there is an obvious Italian theme to the album. It is alleged that gelato, Italian ice cream, was a central inspiration behind the album, and it is this softness, this pleasure and decadence, that form the album’s sound. An aggressive marketing campaign ensure that this band will be heard by a wide audience this summer; Phoenix must hope that what their latest album offers is enough to convert first-time listeners into fans.