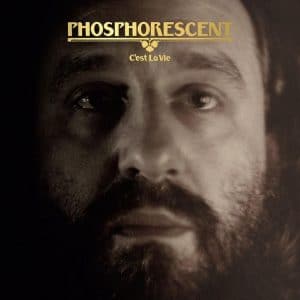 Matthew Houck – aka Phosphorescent – is an intriguing character. His last record, the sublime Muchacho, was a triumph of experimentation. The album was composed mainly of greasy heartland rock and dusty Americana sounds, but with a haunting, despondently delicate edge. Words can’t really do justice to the subtle, cumulative difference that record made on quite a few folks in the Spring of 2013. It’s a beautiful work.

The first real track on this record, C’est La Vie No. 2, shows that there have been some slight tweaks in the Phosphorescent sound – he now sounds lighter of burden, and purer of intention. Sonically, it’s very similar to the kind of ethereal, FM radio experiments of The War On Drugs – which is as much a vehicle for Adam Granduciel’s vision as Phosphorescent is for Houck’s.

Another track that takes Phosphorescent close to The War On Drugs’ sound is the gloriously understated Christmas Down Under. The teary-eyed, minor-key stylings bring the melancholy in Houck’s art to the forefront. It’s a gloomy, somewhat ridiculous notion to ask listeners whether Jesus had a daughter, and if he ever met her – but Houck somewhat pulls it off.

That’s followed up by an album highlight in My Beautiful Boy – which is a heartbreakingly sincere ode to his son. We’re talking John Lennon-level adoration here, which reframes the record in a new light, one where you realise that there’s a point to all of Houck’s existential posturing. He just loves his kid.

These Rocks and New Birth In New England are the two tracks that showcase the depth and breadth of the Phosphorescent sound. The former is a wistful prairie hymnal, the latter is so jubilant you could mistake it for anybody from Vampire Weekend to Paul Simon. It’s fantastic, and is one that you’ll return to most.

There From Here is another late-night, lone-drive cut, which Houck must be able to do in his sleep by now – there’s a couple of them on every record he’s ever done (even the Willie Nelson covers record!) The longest track, Around The Horn, sees him take a few risks – the motorik throb and Can-like insistency brings his sound the closest to Spiritualized it’s ever got. It works, thankfully.

Everything you loved about the last few Phosphorescent records is still here, in abundance, but C’est La Vie seems more streamlined, more emotionally sincere. You can hear that Houck has discovered a lot of love in the past five years, and you only hope we get to hear him discover a tonne more.