Phosphorescent – Here’s To Taking It Easy 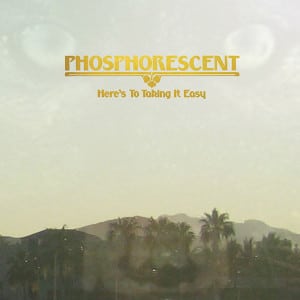 This fourth album from Matthew Houck’s Phosphorescent project originally came out in May but is being reissued so soon simply to tie in with Houck’s early September UK tour. As its title might imply, it’s not exactly the most radical or original of 2010 releases. However, its handling of various Americana and alt-country tropes is so assured and lush that it certainly deserves a second push.

Some will no doubt lament that Houck appears to have abandoned some of Phosphorescent’s more unusual qualities. Previous albums dealt in murky, sometimes oppressive atmospheres, with long, dense songs and untamed, hoarse vocals. Here’s To Taking It Easy very much continues where Phosphorescent’s last album, To Willie, left off. That collection paid tribute to Willie Nelson, and much of this new work could be categorised as fairly conventional country music, earmarked as it is by the regular presence of slide and pedal steel guitars.

Delve deeper, however, and it becomes clear that Houck has not entirely neglected his more wayward and unpredictable tendencies. The melancholy Tell Me Baby (Have You Had Enough) is drowned in reverb and echo, closely resembling Time Out Of Mind-era Bob Dylan and perhaps giving some hint of what the upcoming Daniel Lanois-produced Neil Young album might sound like. Nothing Was Stolen (Love Me Foolishly) is aquatic, languid and almost surreal, with some oddly incongruous handclap sounds. Even more distinctive (and seemingly coming from nowhere) is the quite wonderful Hej, Me I’m Light, a dazzling, haunting vocal chorus arrangement that is far from the Laurel Canyon-meets-Muscle Shoals sound of much of the rest of the album. It is at once both unsettling and uplifting.

Even when Houck is tightly embracing tradition, much of this excellent album is completely irresistible. The gently rolling rhythms of I Don’t Care If There’s Cursing eventually build into an exuberant explosion of slide guitar, pedal steel guitar and Steve Nieve-esque piano flourishes. We’ll Be Here Soon is gorgeously simple and direct – with its own gentle lilt. The storming opener It’s Hard To Be Humble (When You’re From Alabama) offers ramshackle bluesy riffs and muscular horn blasts. It’s hugely enjoyable and it also encapsulates the current Phosphorescent aesthetic – somehow full of energy and simultaneously sounding relaxed almost to the point of laziness. It’s difficult to execute this so well.

Two key factors help make Here’s To Taking It Easy such a tremendous success. First, there’s the fact that Houck is now working with a full touring band – players of serious capabilities who can faithfully render this barroom sound with spirit and honesty. Secondly, it helps that Houck’s songs are often vivid and beautiful. The Mermade Parade may well be the album’s highlight, with its descriptions of Coney Island’s annual fete leading to frustrated, perhaps even bitter, ruminations on a failed relationship. It’s a tremendous, compelling piece of work. From his confession to spending “too long in these bars” to his pondering on why “these nights of pleasure and days of pain have to be so tightly bound”, Houck has a confident, communicative command of the language of this songwriting tradition.

Here’s To Taking It Easy ends up in similar territory to Magnolia Electric Co., the final album Jason Molina made as Songs:Ohia before adopting the album’s title as his new moniker. It’s a rootsy album that is delivered faithfully and respectfully, but one where the strong, clear voice of its author cuts through powerfully. The music is also performed with such vigour and commitment that it’s impossible not to judge it on its own terms. On this basis, it’s one of the year’s most satisfying and convincing albums.