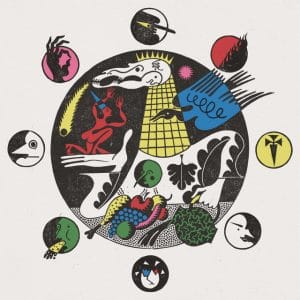 When confronted with a band name like that, the first thing that goes through most people’s minds is that there’s some kind of joke at work. Over the last couple of years however, it’s been increasingly clear that Pigs Pigs Pigs Pigs Pigs Pigs Pigs are no joke. Anyone that has caught them live will know that they are an unstoppable force, and despite their self-induced hamstringing, the band’s status as something truly special has been steadily growing. You can’t keep a good pig (or even seven of them) down.

Given Pigsx7’s penchant for stretching things out beyond the limits, it seems strange that the band’s second album sees them stepping away from the elongated jams that personified Feed The Rats. This time around, they seem less interested in enveloping their unsuspecting audience with 10-minute-plus explorations of the darker side of sludge encrusted psychedelics, and instead cut straight to the chase.  Not that they’ve jettisoned any of the feral power that makes them one of the most exciting live bands in the country at the moment. If anything, they’ve turned everything up beyond 11 this time, opting to throw more skull crushing riffs into the mix. The songs might be shorter, but they lack none of the innate need to pummel that infuses most of their work.

GNT gets the album underway, bubbling like a primordial swamp before an almighty riff swoops in to get things really moving. Pigs Pigs Pigs Pigs Pigs Pigs Pigs have essentially taken rock back to its roots and stripped away any sense of evolution. The result is something that sounds like an embryonic Lemmy crawling through prehistoric mud, roaring for a bottle of Jack Daniels. Musically, they’re not a million miles away from the doom-laden riffs of the earliest incarnation of Black Sabbath (and indeed the band that pinched their original name, Earth). Slow and low they might be, but even when the band seem to have succeeded in stopping time (such as on Shockmaster) there’s still a swing in their delivery that becomes impossible to resist.

Despite their similarities to the progenitors of metal, Pigs Pigs Pigs Pigs Pigs Pigs Pigs definitely cut their own rut, most likely with a monolithic stone slab being lugged to a hilltop for worship. Sabbath were never this loose or relentless and Motörhead could never have been this slow, even if they put the speed to one side. A66 shows the band at their best, continuously shifting through the gears, utilising hypnotic repetition and with Matt Baty’s fevered chanting they rush towards an explosive epiphany.

Thematically, King Of Cowards takes on the Seven Deadly Sins, and despite Pigsx7 often being referred to as a doom band, they somehow make the subject matter sound positively enjoyable. Even the disturbing look into the world of S&M that is Thumbsucker (“she wanted him soaked in blood, drenched in piss…sin, what’s your thing”) comes across as a lurching exhilarating ride.

There are moments of relative calm too, not least the closing track Gloaming, which is about as subtle as this band gets. Starting out like a guided mediation “Breathe, slowly now, hold, then push it out” it ebbs and flows between overblown wig outs and granite heavy riffs with Baty intoning “don’t be scared, listen closely now, I’m your friend, stick to the plan and hold on”. If this is the sound of positive thinking, then we should all be signing up.