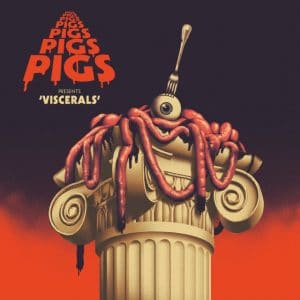 Well, hackneyed and simplistic though this theory may be, their name might have something to do with it. It’s hard to find a review of any of Pigs x7’s work that doesn’t raise either a puzzled or entertained eyebrow at their chosen moniker, and even now, three albums into their career, it remains a talking point. When you pick up a record with those repeated words printed on the sleeve you don’t put it down with your curiosity un-piqued.

Another possible reason, and one that’s connected to the band’s name, is the frequent assertion that they don’t take themselves too seriously. This might have some credence, but it’s equally true of many other metal bands. The dark affectations of the genre might mask some serious music and serious ideas, but there tends to be a playfulness at work in the performance of metal.

But the most appealing thing about Pigs x7 is the music itself. Yes, their sound owes much to the heavyweights of heavy metal – Black Sabbath, Judas Priest, Motörhead – but they are progressive enough to avoid being written off as pastiche while sufficiently rooted to their forebears to avoid pretension. Many bands consciously try to push the limits of their chosen genre and that can be off-putting; in contrast Pigs x7 show an awareness of the broad parameters of metal, and are all the better for it.

Still, they have evolved with each of their albums; their songs have become faster and tighter. Their 2017 debut, Feed The Rats, consisted of two 15-minute tracks that sandwiched between them a single piece of lean meat. 2018’s King Of Cowards managed twice as many tracks in a similar run time but maintained a hazy, stoned vibe; more weight was provided in the form of an aromatic cloud of smoke that you had to wade through in order to get to the riffs.

Viscerals favours shorter track lengths and more immediate songs. The album opens with 20 seconds of rapid drumming, setting the pace for Reducer, which barely pauses for breath as it lays down an insistent riff. Pigs x7 have never so vividly evoked the new wave of British heavy metal, the moment where metal and punk began to collide and crossover as here. It’s followed by the slower Rubbernecker, one for the headbangers rather than the moshers but no less urgent in its sound.

The album includes a further two sharp bursts of punk-metal energy, World Crust and Hell’s Teeth; and the crushing Crazy In Blood (could this really be a Beyoncé reference?), which marries brooding verses with a shout-along chorus. Blood And Butter is a strange interlude carried on muffled beats that sound almost artificial and a spoken word narrative; the result, while not displeasing, is a bit like a Sleaford Mods single played at 33 instead of 45rpm.

There are some bigger, more sprawling tracks too, and these don’t disappoint. New Body is the sludgiest and most dissonant song here, seven minutes of contorted introspection. It begins with vocalist Matt Baty’s anguished bellow, “I’ve had too much to drink, too much to think; I’m dancing with the devil with his two left feet,” and doesn’t let up from there. And Halloween Bolson is Viscerals’ most sustained display of power and perhaps the most ambitious Pigs x7 track to date. Beginning with a circling piledriver riff, it breaks down into an angry bridge before segueing into a passage of car alarm guitar that builds and builds as the song marches towards its savage climax. It’s the highpoint in a record of many highs.