Pink Mountaintops – Get Back 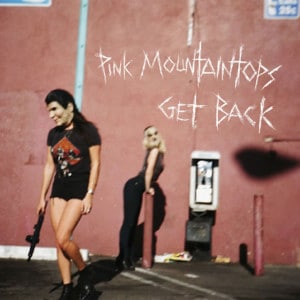 Stephen McBean is just one of those dudes, one of the many guys who inspires equal amounts of applause and jealousy because his projects always, in the truest sense of the word, rock. His day job as guitarist, singer and songwriter in the elephantine stoner-rock band Black Mountain has won him critical acclaim and legions of drowsy followers, including chemically-inclined contemporaries like The Black Angels, who covered No Satisfaction with sinister diligence.

Some more similarly revered names appear on Get Back, continuing the collaborative ethos that made Pink Mountaintops so enthralling to begin with – J Mascis (Dinosaur Jr) appears, as does Steve Kille (Dead Meadow), sometime The Fall member Rob Barbato and his Darker My Love compadre Daniel Allaire (amongst others).

There’s major interest surrounding the dude in the control-room: Joe Cardamone is a true rock ‘n’ roll lifer, incredible musician and potential Iggy Pop lovechild. He blew plenty of minds last year with his enormous, squalling epic Slave Vows. His band, The Icarus Line, have had peaks and troughs of popularity but Joe produced one of the best albums of 2013 practically single-handed.

Back to Get Back, and the music speaks volumes. The record kicks off with Ambulance City, where a throbbing, squelchy motorik beat and gleaming guitar lick lead into a terse rhythm guitar drive – and from there the track powers forward with seemingly endless motion. There’s an undeniable Krautrock influence going on – imagine what the studio smelled like…

Following track The Second Summer Of Love has a shuddering glam-rock stomp – the presskit lauded, amongst other things, McBean and Cardamone’s shared affection for Roxy Music, which is telling. The track has a thunderous rhythm, and showcases McBean’s distinctive pipes. Through All The Worry is a slacker-pop gem complete with fuzzball guitar strums, a cavernous drum sound and a searing solo.

The highlight of the piece could be Sixteen, where skronking sax and a distinctive Kiwi hairiness – there’s even the signature dum-dum-dum-shh Spector beat in there somewhere, here making its four-thousandth appearance on a rock ‘n’ roll record. It sounds like Stephen Malkmus’ grainiest rockers, and the looseness of the rhythm compounds the “groovy, maaan” tone of the track.

North Hollywood Microwaves features Annie Hardy from Giant Drag in a prominent role – and her rapping, awesome as it is, features some nasty lyrics you’re more likely to hear on some peroxide Miami skank rap record; male emissions, female genitalia – you get the idea. It sexes up an already juicy tune, and restores that long-lost quality about rock and roll – the idea that you wouldn’t want your momma listening to it. Cardamone tries to imbue all of his projects with that same volatile, sexual quality, but you wouldn’t catch him talking about shoving things into his intimates.

Shakedown has a British feel – think David Bowie’s kaleidoscopic folk-rock, Robert Smith of The Cure’s fractured psychedelia, in which the loose, spacey vibe carries the listener along on a narcotic breeze. The Last Dance closes the record out with some eerie clanging, some shaky-robot chop-chop chords coated in fuzz.

The only flaw with this album is that it’s simply not long enough. This record turns the flaws into the bits you like most – much like Guided By Voices. They’re the tunes you want more of, the ones that seep into your waking consciousness like teastains on your favourite shirt. You catch a hint of a band you’d rather not mention, or you hear a lick that you remember from a record you sold a while back. But Get Back is a really great record, and one that goes some way to cementing McBean’s name amongst the legendary lifers that he’s trying (successfully) to emulate.