Pink – The Truth About Love 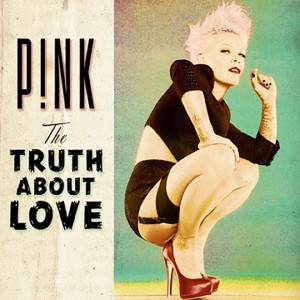 It’s been 12 years since Alecia ‘Pink’ Moore first appeared on the scene. Although never quite achieving the cultural impact (and infamy) of contemporaries such as Britney Spears and Christina Aguilera, she’s proved surprisingly durable and influential (would there be any Katy Perry or Ke$ha without Pink?).

A reason for this durability is her ability to effortlessly switch between personas – she can be the bratty pop-rocker, she can be the serious singer/songwriter and she can frighten little girls’ parents by swearing and singing about casual sex a lot. The Truth About Love, like her previous five albums, demonstrates all these sides to varying degrees of success.

It’s impossible to listen to much of The Truth About Love without thinking of Moore’s well documented marriage problems. She may have given birth to a daughter last year, but this is far from Pink’s ‘mature motherhood’ album. Over the last couple of years, she’s split up with her husband, gone through marriage guidance, and got back together with him, so it’s not hard to imagine who songs like Blow Me (One Last Kiss), How Come You’re Not Here and True Love (“you’re an asshole, but I love you”) are directed at.

Pink is at her best when she’s displaying that famous attitude. The aforementioned anti-love song Blow Me (One Last Kiss) is a highlight, with its radio-unfriendly refrain of “I’ve had a shit day” and the opening Are We All We Are is a fine kick-off point for the album, full of disorientating synths, shouty choruses and surprisingly heavy beats. True Love is a celebration of a dysfunctional love song, which is also notable for featuring the first recorded output in over three years of a certain Lily Rose Cooper (nee Lily Allen). She doesn’t so much perform a duet as just sing a verse and backing vocals, but it’s certainly nice to hear those unmistakeable tones once again.

Moore’s other side – the impassioned songwriter – is showcased on Try, which demonstrates that she has a voice that not enough people give her credit for. For want of a better phrase, it’s a full-on power ballad, with yet more references to love going wrong, and the sort of thing you can imagine someone like Kelly Clarkson pulling off in her sleep. Similar territory is trodden in Just Give Me A Reason, a duet with .fun‘s lead singer Nate Ruess (which sounds more like a .fun song than a Pink song, funnily enough), but it’s these moments that show Pink at her most formulaic.

For, like her previous albums, The Truth About Love is high on potential singles but also high on filler. It’s a bit too long and the sensitive ballads are nowhere near as much fun as the sweary, shouty pop songs. The zig-zagging between styles also gives the listener a bit of a disorientating feel – at one point on Here Comes The Weekend, Eminem suddenly appears to spit out a trademark rapid-fire rap, and it feels like a section from a totally different song.

Maybe not a wholly successful album then, but at its best (Blow Me One Last Kiss, the ode to casual sex that is the uncompromisingly titled Slut Like You, the excellent title track), The Truth About Love proves that Pink can still credibly compete with the pop stars she helped to inspire.