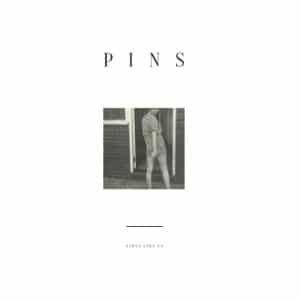 You’ve got to hand it to bands from Manchester; they really do know how to sing the word ‘adored’ like they mean it. You accept it, and it is not up for any questioning, doubt or disapproval.

PINS‘ moment of adoration comes during Stay True. Where amongst the surfy fuzz of guitars and cooed Shangri La harmonies Faith Holgate declares her intention to “stay here / alone and adored”. Adored. Adored. It’s funny, normally when people declare how adored they are, it sounds a bit hollow. For the Mancunians, not so much.

Not that PINS massively evoke The Stone Roses, though they do have another thing in common aside from the aforementioned messianic declarations. They share a sense of kinship between each member that makes them appear like the last gang in town.

Musically though, there’s more of an ocean than a ship canal between them. PINS are reverb heavy, monochrome of tone and could happily live on a street with Black Rebel Motorcycle Club, Crystal Stilts and The Dum Dum Girls, safe in the knowledge that any cross-household music loans would be almost guaranteed to be well received. However, it’s in the delivery that they make it work.

There’s a steely determination and a teeth-bared intent to Girls Like Us that prevents it sounding hackneyed. It’s an album with real confidence. From the opening swirl of It’s On, to the album’s title track, to the fairly self-explanatory I Want It All, everything that is done is done with a sense of total assurance. So everywhere drums thud, guitars ring and basslines stalk the corridors with a bad attitude and a set of bronze knuckledusters.

It’s undeniably atmospheric. And, more importantly, in that atmosphere they’ve also come up with some really good songs. The spoken word Velvet Morning, which opens with the always disorientating sound of a backwards guitar track, is a stylistic swerve, but one which strangely works. While on the lovely The Darkest Day the overriding emotion is less violent retribution and more plaintive contemplation, and is all the better for it.

It is a very decent debut, if not quite a stellar one. It misses that mainly due to a middle section which gets a bit similar. Waiting For The End, Howlin’ and Lost Lost Lost are all well and good, but following one after the other causes some momentum loss in the sharp glare of over-familiarity.

But overall, this is an album full of promise, poise and brio. Total adoration might not be PINS’ just yet, but Girls Like Us leaves you thinking it may well not be long in coming.