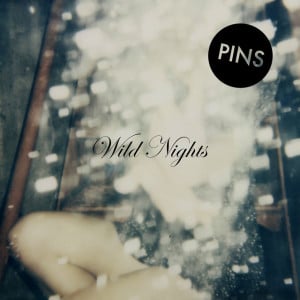 Wild Nights, album number two from Manchester’s PINS, is pretty reminiscent of both their debut (Girls Like Us) and a whole bunch of other artists from throughout history. If inclination took hold, you could almost certainly write down a fairly impressive list of people who PINS sound like. Construct an enormous Venn diagram of influences and place them at the centre of a whole cavalcade of intersects.

In the end though, that doesn’t really seem to matter. PINS don’t seem like the kind of band who would be particularly bothered by any of that, so neither should you be. What is worth caring about is the fact that Wild Nights builds, tightens and generally improves on that debut without really altering all that sat at its core. It is almost exactly how you hoped the second release would go, had you been at all enamoured with their first.

Guitars therefore are hazy and heavy with reverb. The rhythm section is simple and purposeful. Lyrics are constructed in block like fashion from rhymes which work with the kind of brutalist simplicity you generally only see in the construction of car parks, and delivered in a fug of deadpan, inscrutable cool.

Revolutionary it is not. But PINS manage to make something that has been done a million times before sound good because they do it so well. Which in many ways is all the more impressive: despite the fact you’ve heard this kind of thing already, the art and the craft and the skill that has gone into Wild Nights makes it immensely likeable. And as cool and as inscrutable as it ever gets, there’s always a crack in the facade of Wild Nights, and that’s where the fun gets in.

Young Girls breezes along with a carefree glide. Curse These Dreams jangles, a Johnny Marr-like guitar kept just out of reach as the song swoops and swoons in front of you, and then ends with a brilliantly sudden stop, while Oh Lord gets monochrome and menacing, driven onwards a rumble of bass and ending up a distant relation of Leader Of The Pack. Vroom. Vroom.

It also really helps that there’s always a, albeit often veiled, wit on display here. Without that it would be kind of hard to take the likes of Molly and the highly complex and highly nuanced allegory of drug use which it weaves. But with it you can give Wild Nights the benefit of the doubt. PINS give the impression of enjoying themselves while not taking this whole rock ‘n’ roll thing entirely seriously. Just seriously enough to make something really fine.