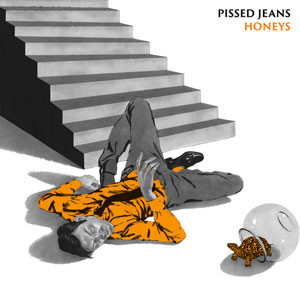 Pissed Jeans are something of a strange proposition. The Pennsylvania band are, on the face of it, a bunch of nondescript straight laced regular guys who just happen to play in a rock band. What is not immediately clear though is that the rock band they play in is utterly deranged.

Led by the furious ball of energy that is singer Matt Korvette, Pissed Jeans have navigated their way through three albums of intense and vicious punk rock carried though with wit and reckless abandon. Their fourth record for Sub Pop is by far their strongest statement yet. Honeys is an album that demands to be heard and will not take no for an answer.

Perhaps the most interesting thing about Pissed Jeans is their lyrical content, which is deeply idiosyncratic and often laugh out loud funny. Korvette seems to portray the persona of an incredibly angry man in despair at the littlest things. Opening track Bathroom Laughter is a rip roaring piece of thrashing punk rock, which sees him indulging in a feverish fit of rage complete with searing guttural roars, belches and screams describing finding his path blocked to a public toilet.

Honeys is an album that deals with regular themes and goes into them in forensic detail. The track listing features mundane titles like Chain Worker, Cafeteria Food and Health Plan. But the music is anything but mundane; crashing drums and careering guitars give the album a sense of breathless excitement. Lyrically the songs deal with Korvette’s unique foibles. For example, Romanticize Me sees him vigorously defending his slovenly nature to a nagging partner including the excellent line, “When it comes to sleeping I’m a talented man.”  You certainly wouldn’t argue with him.

Elsewhere, Cathouse is a jittery, intense tale of a feline allergy, with the music’s insistent clatter matching Korvette’s angst at being in close quarters with the dreaded cat; he finds himself, “itching, shivering and praying for forgiveness”.

Pissed Jeans’ music is certainly provocative but there is nothing witless or unpleasant about this album. In the main, it is a joy; heavy noise rock that has a personality. It’s probably not quite such a joy for Korvette though. His persona of the eternally irked overgrown teenager is conveyed throughout. In an interview prior to the album he describes Honeys as dealing in “adult angst”; it is an apt description exemplified by the final track Teenage Adult where he wails, “There’s no reason to ever grow up.”

While Korvette’s antics are always the focal point, the band as a whole has stepped up their game. Honeys is the most direct and confident Pissed Jeans record, and there are some welcome nuances to their sound. The swaggering glammy strut of Loub is particularly effective, as is the lurching baleful sludge of Chain Worker, a dead ringer for mid-period Black Flag.

Pissed Jeans are a band that defy expectations. While Honeys deals with the mundane and everyday it does so with such intense aggression, to almost theatrical levels, that it sounds as if it is the most important music in the world being committed to tape. A truly excellent rock record.