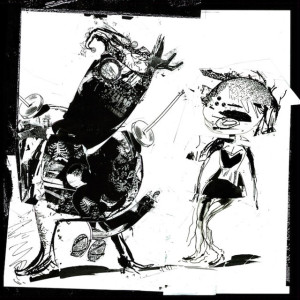 You are probably aware, because you read music websites, that the new Pixies isn’t exactly the group you knew, grew up with and loved. Maybe you’ve made your mind up about Indie Cindy. Alternative rock godhead Kim Deal left the band to lead the equally estimable Breeders to critical acclaim and worldwide success with a couple of masterpieces (Pod, Last Splash) and at least one cult classic. Another Kim came and went, and now there’s another token female bassist that doesn’t appear on the record – a guy called Dingo does. Make of that what you will.

Let’s get straight to it. Indie Cindy, contrary to whatever our sour American contemporaries might have you believe, is not awful. Far from it. But compared to Pixies’ legendary catalogue, it sounds a touch plain. And that’s a problem. The Pixies are renowned for fireworks, for glitterbombs, for kaleidoscopic explosions. Remember the first time you heard Debaser? Gigantic? Cactus? You might not have a moment like that on Indie Cindy, but they’re trying their best to give you those exact same heeby-jeebys.

“They” these days is Frank Black, Joey Santiago and David Lovering. Of course, this isn’t their first ‘reunion’ work – together with Kim they recorded the 2004 download Bam Thwok. Kim wrote it, Kim liked it, Black liked it, Lovering dissed it. And so ended phase two of the Pixies. Phase three kicked off with three EPs, that are now collected here as Indie Cindy (having undergone some minor re-sequencing.)

The record opens with the final track from EP1, What Goes Boom. It’s a chugging beast that lurches and shudders where you’d expect Pixies to glide – the riff is tastefully heavy, the feedback squall howls and squeals with a convincing bite and the lyrics are suitably absurd: “Ping pong bingo/fills a la Ringo.” Whether it’s luck or some sinister turn of events, there are moments in the track where you think you’re listening to the Pixies.

Greens And Blues, culled from EP2, is one of the lesser cuts here – the acoustic-strummed rhythm and anonymous bass-line doesn’t do much to help the optimists out. The title track follows – it’s garnered unfair bilious responses so far. The plodding, heavy rhythm and twanging guitar sound relatively fresh – don’t the Arctic Monkeys go for the same vibe pretty regularly nowadays?

Bagboy follows, and that’s a winner. If no other track convinces you, Bagboy will. If you come to the record expecting magnificence – head in Bagboy’s direction immediately. Black yowls and hollers like a junk-sick preacher while fuzzed-out leads and choppy riffs blend with thunderous drumming and airy ‘definitely not meant to be Kim Deal’ vocals swirl around him.

Some more ‘not Kim’ backing vocals appear on the next tune Magdalena 318, which turns out to be another highlight for its dichotomous vibe: Sickly sweet vocals and raw, fuzzy riff slithers out of the speakers.

Amongst the other tracks there are some stand-outs. Andro Queen is a delight; the spaced-out vibe is comforting and the martial drum-line carries the shimmering guitar with a forceful kinetic energy. The fast and loose rave-up of Snakes is also pretty cool – the hissing, sibilant cymbal attack is positively onomatopoeic. However, all good will towards the album can either be reinforced or totally destroyed by the closer, Jaime Bravo. It sounds like two or three different Pixies songs jammed together, and depending on how ardent a fan you are, you’ll be able to pick them out immediately.

The things the album is missing are head-smackingly obvious – the rigid, punky bass Kim Deal brought (was allowed to bring) to Doolittle, the bone-dry thud of tracks like Cactus and the brevity of Trompe le Monde’s finest moments (their electric cover of Head On, Planet Of Sound, Subbacultcha, Distance Equals Rate Times Time). And what about some anger? Some vitriol? All of those ingredients are missing.

The record will be packaged with a 12-track Live In The USA tour disc, featuring Kim Shattuck on bass duties. If you’re opting for that version, the spiky renditions of Head On and Distance Equals Rate… are excellent. Of the three new album tracks featured, Magdalena is, unsurprisingly, the best.

By no means a poor record, if this was a release by a new band, we’d be celebrating the finer moments for the quality they have, not the magic that they don’t. If you’re new to Pixies, try this one first, then let the magic of their previous records blow your mind. If you’re already in love with their best work, a dalliance with Indie Cindy can’t hurt. It can actually be pretty fun.