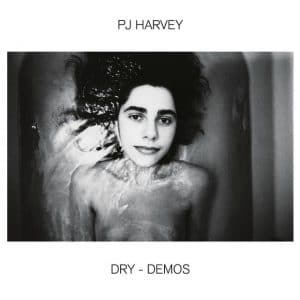 2020 sees the beginning of an extensive, immersive series of reissues from PJ Harvey, where her entire catalogue will be rereleased on vinyl, and ‘for the first time, each of PJ Harvey’s album demos will be available as a stand-alone album on digital and vinyl.’

The announcement of the demos was particularly exciting – the demos for Dry have been incredibly hard to get hold of by legitimate means, seeing as they were only ever released as an add-on disc to the first few thousand CD copies of Dry back in 1992. These demos represent the first glimpse the world has of one of the most powerful, singular songwriters ever, and should be required listening for anyone even remotely interested in how great music is made from humble beginnings.

PJ Harvey is no stranger to demos, having released the 4-Track Demos album (made up of demos of all of the songs from the Rid Of Me album), but the demos for Dry are particularly revealing and insightful. Hearing the entire album in a germinative state is a fantastic process, and as a physical artefact, it will feature ‘brand new artwork with previously unseen photos by Maria Mochnacz’.

Some of the tracks here are almost as good as their album counterparts, not least the chiming, spare version of Happy And Bleeding. Its wounded, haunted Plastic Ono Band openness is equally beautiful and horrifying, with the repeated refrain of “Fig fruit flower myself inside out for you (happy I’m bleeding)” hitting particularly hard.

The demo of Sheela-Na-Gig is, unsurprisingly, the highlight of the set – and it sounds more like Patti Smith than ever, with Polly’s vocals conveying an even more furious, riotous (and unhinged) power than on the version that ended up on the album. Dress, another highlight of the original album, is also represented beautifully here, with its chugging strums framing Polly’s voice wonderfully. Some people (present reviewer included) might even consider it to be the definitive version – and in its naked form, it’s even more apparent how Kings Of Leon ‘borrowed’ its chorus riff and used it in Molly’s Chambers.

Plants And Rags, Hair, and Fountain are all equally powerful in this form too, with each of the songs’ feeling and atmosphere’s amplified by the closeness of the sound – there are moments where it sounds like Polly could be singing in the same room, such is the nature of these recordings.

Like the original album, most of these songs deal with the themes of love, loss, sex and power in open, frank ways that can make for – at first – a difficult, unwieldy listen. But presented here, in a more intimate setting, the songs are more accessible, and certainly more apt for repeated listens. If you’re a long-time fan, and haven’t heard these, then they’re essential. If you’re a new fan intrigued by this new reissue campaign, then start with the studio albums and work your way out to these, but do it quick: the To Bring You My Love demos drop in September.