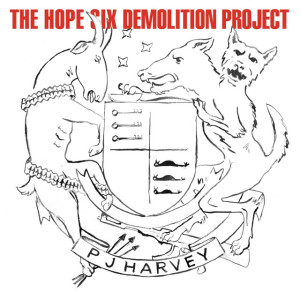 Although on Let England Shake PJ Harvey closely referenced World War I, it was equally a deeper meditation on the terrible vagaries of war in a wider sense. It was an extraordinary moment in an already remarkable career in which she refracted a historical reference point through her own musical lens for a larger purpose. It was a majestic marriage of an important and consistent thematic thread with her most daring musical experiments, and she delivered a work of staggering beauty. Inevitably, rightly or wrongly, her follow-up project was always going to attract a high level of scrutiny.

Rather than try to shirk such attention, Harvey chose to record the album in full view of prying eyes at an art installation at Somerset House. Later in 2015, she presented the first snippets of the record as part of an evening to launch the album’s accompanying book, The Hollow of the Hand. Harvey’s poetry was received rather coolly as lacking the density to make it truly poetic. What it did clarify was that the new album would be inspired by the travels she had made with photographer Seamus Murphy to Afghanistan, Kosovo and Washington.

An impressionistic travelogue of seemingly disparate geographical locations could encourage concerns over thematic consistency. And there is no doubt that this is precisely what Harvey will be charged with, as The Hope Six Demolition Project is a very different record to in comparison to Let England Shake’s tightly bound motifs. It’s a messy affair in many respects, but the world is a pretty messy place right now, and anyone looking for nice neat answers is likely to be disappointed.

Ultimately this is where the album succeeds: as a brutally honest reflection of those travel experiences. Ministry of Defence’s blunt hammer combines with a wily vocal that reports “they spray graffiti in Arabic and balance sticks in human shit,” and then seems to reference T.S. Eliot’s Hollow Men, prophesying “this is how the world will end.” As with every subject she covers, Harvey refuses to look the other way, rather these experiences fall under her unflinching glare.

Whilst Let England Shake is pretty much beyond reproach it is great to see Harvey revisit the kind of dark and dirty blues she perfected on 1995’s To Bring You My Love. Although of a very different kind, the swamp dragging River Anacostia recalls that rawness. Beginning with a beaten-down recitation of Wade in the Water, Harvey intervenes with a serpentine, mellifluous vocal which simultaneously haunts and shimmers. The “God’s gonna trouble the water” lyric is left to hang as a ghostly warning.

The Hope Six Demolition Project has a more ramshackle approach that is quite removed from the considered musicality of Let England Shake. The band she has arranged around her, including long-time collaborator John Parish, sound loose and relaxed. The recording has the live feel of a travelling band, and it’s a group that covers a lot of ground. The Wheel sees Harvey getting her groove on, and as much as her autoharp flirtations are exhilarating it’s nice to hear her wielding an axe again. Similarly, Community of Hope is a pretty straight forward composition, but somehow like everything she does it sounds entirely her own. She is an auteur in the sense that her music always has a singularity that marks it specifically a PJ Harvey recording.

The aforementioned tracks also contain two of the many great melodies on this record. The Orange Monkey figures largely in this collection, the building verses touchingly punctuated by Harvey’s gentle “ah ha’s.” Similarly, Dollar, Dollar is a sparse yet hugely affecting song which sees her recall seeing a young man beg from the window, and comfortable safety, of the passing car she occupies. It reads like a hymn wracked with guilt, and it’s a pretty powerful way to sign off – not with a bang, but with a whimper.

The Hope Six Demolition Project has plenty of harsh, ugly moments; this isn’t Harvey crafting beautiful vignettes. Instead, she’s often reflecting the ugliness she sees around her, conceding that the world ain’t always pretty. It is also a pretty confusing place, as is the record at times. What it is not is a manifesto on the state of the world, but her painting it, reflecting it. And in true PJ Harvey fashion, despite the public recording, it feels like it was created free of outside influence. Her music is always so distinctly hers, and she remains one of the most distinctive and thrilling voices we have.