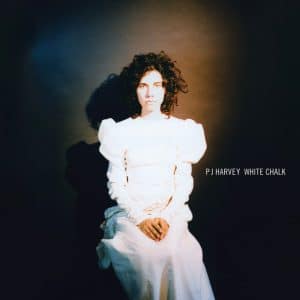 Good golly Ms. Polly. You sure like to bawl.

White Chalk, the eighth album by the only good thing to come out of Dorset not high in bad cholesterol, and the first since 2004’s Uh Huh Her, is not a happy thing. In fact, if you were being totally accurate, you might say it was a bleak, weeping shell of a thing, dripping with the kind of sexual tension you usually only get when hooking yourself up to a Van der Graaf machine in nylon underpants.

It’s also an album which sees Polly Jean Harvey holster the six string and lead with the piano, an instrument that prior to this record she had little experience of. Now, let’s just consider that for a moment. Can you imagine Kasabian announcing: “Yeah, we uh wanted to get away from that whole baggy thing, so me and Serge have spent some time learning the lute, and we’re gonna base all the new songs around that. Yeah! Fookin’ empire!”

No. You can’t. But that’s why Pee-Jay endures and Kasabian make you want to go out into the yard and knock nails into walls with your forehead. She’s constantly changing, constantly pushing, and constantly surprising.

And of course, constantly brilliant. White Chalk is an amazing album, racked with beauty, stricken with fragility and haunted with something otherworldly. It’s the kind of album you could imagine the first Mrs Rochester making, if she wasn’t quite so mad. Or quite so locked in an attic. Or indeed, quite so fictional.

The Devil inches forward on an incessant one-two-three note riff, the vocal drifting around the very spit of the spectral Victoriana doppelganger on the cover. Grow, Grow, Grow is what Gardeners Question Time would sound like if Nick Cave was the presenter and Dear Darkness is a skeletal approximation of how you imagined Will Oldham to be if he was Bonny Princess Billy.

It’s really not an album you feel safe leaving alone with any sharp knives. Although, the way she sets the macabre scene (“Hit her with a hammer / teeth smashed in”) with a coroners detachment on The Piano, the bodies have probably all been hidden already.

That song is extraordinary. Beginning with the faintest heartbeat of a drum and PJ’s derisory whispers it gradually grows gothic wings and soars off, Harvey becoming as inconsolably high-pitched as Peter Auty (You know, “I’m waaaalking in the aaaaair”) having a bollock kicking competition with a camel.

It’s a crushing, stupendously affecting thing. But that’s her all over. A thoroughbred in a field of also rans. She’s worth a billion Meluas, a trillion Tunstalls and an incalculable number of Bedingfields. White Chalk; Polly, it’s a cracker.