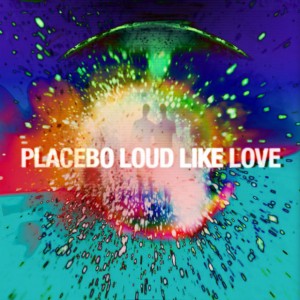 In the nearly 20 years since they broke through, Placebo have had their fair share of dramatic ups and downs. With that in mind, Loud Like Love, their seventh studio album, could be considered a quintessential Placebo album. It’s the follow-up to Battle For The Sun, which was the sound of a band that had just awoken from a comatose state. That LP seemed to suggest that, with the addition of a new drummer in Steve Forrest joining Brian Molko and Stefan Olsdal, things were on the up and that they seemed to find a way to progress with their career at middle age.

Initially, it would be easy to assume that the good times will keep on rolling. The title track blasts out with full force as Molko mentions ‘love’ a lot and alternates between demanding the listener to breathe and believe. It’s possibly the giddiest that Placebo have ever sounded. Scene Of The Crime is introduced with handclaps-a-plenty as it stomps away with much urgency, with Molko sounding even more revitalised than he did four years ago.

From here on in, old habits creep in and to say it’s an extremely mixed bag is to understate. In a way, Too Many Friends is representative of all that isn’t right with Loud Like Love. It’s not the worst idea in the world to talk about how social media and the internet has affected the meaningful nature of relationships, but it’s so clunky that it’s hard to take seriously at all. For all its bite and menace, it fails to hit the spot because, sonically speaking, it feels as though we’ve been here before. After the optimism that was a breath of fresh air on their last LP, the negativity has swept back in a manner that is about as subtle as a fire alarm.

However, there’s a decent stab at maturity just around the corner. A Million Little Pieces is classic Placebo, but only if you just factor in their recent albums as opposed to their late ’90s early work. This downbeat and resigned number could have easily found a home on Meds. Begin The End lays all of its cards, emotionally speaking, out on the table. The guitar plucks that propel the song onwards might be tender but dig underneath the surface and you’ll uncover an anguished heart. Lyrically, it’s direct and brutal, but not in a cringeworthy teenage-angst way.

When they’re trying to provoke a reaction, they come across as trying too hard. When they put more focus on restraint, they’re capable of still being relevant. Loud Like Love has bright spots, but the laborious moments threaten to undo their good work. Those who never boarded the Placebo train in the first place will find little here to make them reconsider, and even the die-hards might have to admit that their favourite band are at a crossroads.