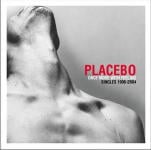 Having previously caused excited furore with their openly sleazy image and accompanying songs such as Nancy Boy and Pure Morning, Placebo are now trundling along steadily on a more mature footing. Impish frontman Brian Molko has a drastic new hairdo to cover up his vast receding hairline where previously there rested a black shoulder-length barnet. He looked like a strangely attractive transvestite with promise of endless drinking and drugs.

What this greatest hits album shows however is that Placebo is still a hefty part of this country’s musical make-up, reeling off the hits from their last four albums Placebo, Without You I’m Nothing, Black Market Music and Sleeping With Ghosts. What it also documents is that their catchy underworld songs have kept to a similar formula in the last eight years. The dandy riffs, dark fuzzy guitars, tales of disjointed debauchery and of course frontman Brian Molko’s unmistakable high nasal voice.

Placebo occupy that vast hinterland between ladyboy rock and British indie. Consistent themes are seedy worlds where “a friend in need’s a friend indeed, a friend with weed is better” (Pure Morning) and other such bon mots of our unsettled and decadent generation. Hearing the hits all packaged together is like a comforting trawl back through the late nineties with memories of snake bite and smudged eyeliner. All the hits are on here. Of course there’s Nancy Boy as well as You Don’t Care About Us, Special K and Pure Morning.

Choosing the duet version with David Bowie on Without You I’m Nothing illuminates not only their similar thread in music but also offers a treat for those who didn’t buy the specially released single. All these songs together sound like a Lost Boys soundtrack of the new millenia combined with something the Marquis de Sade might pen. Songs such as The Bitter End convey the dark underground world inhabited by the striking trio, Special K harkens to another favourite theme: drug debauchery, and there’s no escaping the sneering commentary on sex in songs such as Taste In Men. All are depraved but sumptuously rich in playfully dour language and glimmering melody.

Towards the end there is a sudden gear-change into a different sound in the electronica-studded English Summer Rain, released in February 2004. The first song on here to break with Placebo tradition, venturing away from trad rock instruments and shuffling instead on to a club dance floor. But there is more to come. We also have here Protege Moi, sung partly in French (though you can still recognise Molko’s reedy whine) – a single only ever released in France.

The penultimate track is new song I Do, which doesn’t so much shift away from musical style as thematic style. Who’d have ever thought they’d hear Molko crooning “I want to fall in love with you” in what has to be the most romantic song Placebo have ever written. The final treat is the inclusion of new single Twenty Years, released on Monday 18th October, a melancholic reflection on mortality that seals the band as one that has grown out of dandy splurges into the dark netherworld. Like Molko sings in This Picture: “You can’t stop growing old”.

Any fan would relish all these hits on one CD. If this album shows anything, it shows that Placebo are still very much in the picture and have become one of the UK’s most successful bands in the last decade without running dry. This album comes highly reccomended.