Plan B – The Defamation Of Strickland Banks 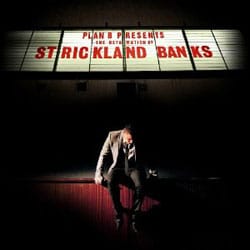 When it comes to startling reinventions, that of Ben Drew, aka Plan B, will probably be the year’s biggest eyebrow raiser.

Four years ago, Drew was an angry, acoustic-guitar toting, hoodie wearing rapper – introducing his debut album Who Needs Actions When You Got Words with the memorable words “It’s my time now, ya get me? Fuckin’ cunts”, before threatening to “Stab you in the eye with a fuckin’ biro” and telling all manner of grim tales about gang culture, underage sex and drugs. It was, in a word, bleak.

Now he’s back, as a sharp-suited soul man with a sound that owes far more to Amy Winehouse than Wu-Tang Clan. And although the angry raps still remain in part, the biggest revelation here is the sweet falsetto he adopts on most tracks.

This new sound is due to the fact that, on this album, Drew is playing a character – that of the titular Strickland Banks. It’s a concept album, telling the tale of Banks, a soul singer who spends an ill-advised night with an obsessed groupie and ends up in jail on a rape charge. It’s a compelling narrative, at least for the first half of the album. Yet that’s where the problems start.

For to properly work as a concept, the whole story needs to be thought through. The first few tracks introduce Strickland, his biggest hit Love Goes Down, and then songs like Stay Too Long and She Said tell the story of Strickland’s downfall.

Yet then, with over half the album to go, the remaining tracks are simply songs about how Strickland isn’t coping well in jail, how he’s an innocent man banged up for something he’s not done, and how his accuser should feel ashamed of herself. There’s not even any resolution to the saga, with closing track What Yo Gonna Do set during Strickland’s appeal, but with no answer as to whether it’s successful.

If the album fails as a concept though, the good news is that the songs here are, mostly, very strong. Love Come Down is a fine opener, with horns and harmonies working well to create a retro feel. Although the majority of the album is in this style, Drew’s breathless raps do make an appearance, to best effect on the exhilarating Stay Too Long, which even has a touch of Rage Against The Machine in its frantic guitar chords.

Perhaps best of all is She Said, which successfully melds both the old-school soul style and Drew’s rapping. Set in the courtroom where Banks is on trial, it successfully propels the album’s narrative along while also working well as a song in its own right. There’s also a cheeky nod to Drew’s new style in namechecking one of Winehouse’s biggest songs (“This has got bigger than I ever could have planned, like that song by The Zutons, Valerie”).

The second half of the album suffers by comparison with the first half, with a big surplus of neo-soul songs all about how Strickland is an innocent man. The Recluse is simply about how he likes to stay in his cell, while Praying and Free explore similar territory – there’s only so many times you can hear a horn-drenched soul song about how much of a downer being locked up is.

There are some interesting topics explored, such as Darkest Place’s prayer to a God that he now longer believes in, but compared to Plan B’s gritty early raps about teenage life, it pales somewhat in comparison. Also, tracks such as I Know A Song slip rather too easily into James Morrison territory, a market that’s already far too crowded.

Quite what fans of Plan’s B first album will make of The Defamation Of Strickland Banks is anyone’s guess, for a more drastic volte-face is difficult to recall. It will no doubt propel Drew into the commercial stratosphere, but the edge and grittiness that made Who Needs Actions… such a compelling listen has gone. His next move (his Plan C if you like) will be a interesting one.

Plan B MP3s or CDs

Plan B on Spotify