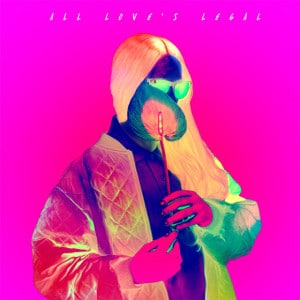 The name Planningtorock may conjure up images of fist-pumping metalheads ready to get their air-guitar on, but the reality is very different. In fact, the Planningtorock is the pseudonym of Jam Rostron, formerly Janine Rostron of Bolton who changed her name and moved to Berlin. Her third album, All Love’s Legal, is full of that city’s influence – dark, shimmering dance music with a cerebral edge.

It’s also an album that may appear to some to be rather too earnest. An examination of gender politics and sexuality, it features song titles like Let’s Talk About Gender Baby and Misogyny Drop Dead, which  don’t exactly hint at the sound of a celebratory night on the tiles.

Against the odds though, it mostly works, mainly thanks to Rostron’s love of glitchy, icy beats. Her voice is deliberately pitch-shifted, so she sounds appropriately androgynous, and on the terrific Human Drama she builds a wondrous soundscape of synths, strings and handclaps.

Rostrom is a regular collaborator with Swedish avant-garde masters The Knife, but there’s nothing on All Love’s Legal that should scare away people who prefer their music straightforward. Although Planningtorock is thoughtful and intelligent, she’s never less than accessible, be it the funky, twitchy Misogyny Drop Dead, the hypnotic thud of Let’s Talk About Gender Baby or the epic, horn-fuelled celebration of the album’s stand-out Public Love.

Sometimes Rostrom’s key technique of repeating lyrical motifs wears a bit thin. The opening Welcome is simply two minutes of Rostrom singing “Fall in love with whoever you want to” over some icy synths, while the otherwise magisterial title tracks falls down with clumsy lyrics like “you can’t illegalise love”. The self-explanatory Misogyny Drop Dead, meanwhile, contains the puzzling proclamation that “Jam is my name, and jam roll is my game”.

Yet there’s much to enjoy and admire on All Love’s Legal, if not necessarily fall completely in love with. There are hints of Grimes in places, and large nods to that other celebration of androgyny, Antony Hegarty (especially on the latter’s work with Hercules And Love Affair). At times though, it feels a bit too icy – great at moving the feet and the brain, but sometimes it doesn’t quite connect with the heart.

However, when it does all come together, it does so beautifully – the aforementioned Let’s Talk About Gender Baby is a disco anthem in waiting, and the closing Patriarchy Over & Out is perhaps the standout track, a dance classic that sounds just as effective in the living room than it does through a huge sound system. Rostrum is probably destined to stay a cult interest for now, but if you’re looking for dance music with a pulse and a brain, then she’s guaranteed to be your new jam.