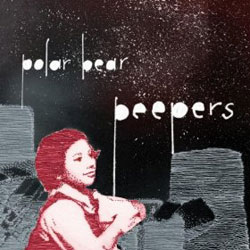 It’s a fine line in modern jazz music between allowing yourself some artistic freedom and throwing caution to the winds without any thought for the listener. Happily Polar Bear’s fourth album sees them very much in the former category, projecting their very souls into the homes of their audience.

This is nowhere near as straightforward as it sounds, for on Peepers the band have managed to bring about a combination of exploration and intimacy, meaning they can be approached from several viewpoints. Those more used to electronica meanderings will have plenty with which to reward themselves, thanks to the careful studio work of Leafcutter John, while those who prefer more of a first principles approach will take much from the saxophone playing of Pete Wareham and Mark Lockheart.

The music has great personality, too. Drunken Pharoah staggers about aimlessly like someone looking for their bed in the dark, the saxophone buzzing around at head height like a mosquito evading capture. A New Morning Will Come moves closer to DJ Shadow territory, with its beat brushed out with an easy charm.

Wareham is superb in fact, lending a real soulful quality to his solos at times, and there are moments of intense intimacy between the band – and very little in the way of superficial notes. Also adhering to the idea that it’s OK to write concise saxophone solos is the powerful Scream, which really packs a punch despite being all over in 30 seconds that sounds more akin to a persistent fire alarm than a wind instrument.

Elsewhere the band make great organic jazz and pop-derived music integrate with seemingly little effort. The breezy Happy For You gets the album off to a bright start with its repeated riff, while the thoughtful The Love Didn’t Go Anywhere begins with an affecting, plaintive solo on Wareham�s tenor, the two saxophones then winding softly in and out of each other’s melodies. Meanwhile the title track blends perky saxophone and lithe bass to good effect, while the more raucous Hope Every Day Is A Happy New Year adds bursts of energy.

An invigorating album, then, and one that says a great deal despite being instrumental the whole way through. Wareham�s saxophone is perhaps inevitably the star, but the whole band unite in a shared purpose, conveying feelings and emotions to a satisfying degree of intensity.