Poliça – Give You The Ghost 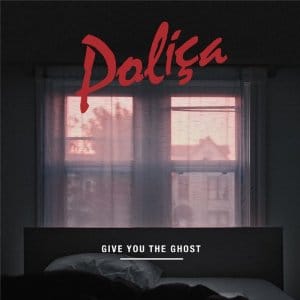 What does it take to become both Bon Iver and Jay-Z‘s favourite indie band? Well, an album of dreamy, distorted vocals stretching across 11 tracks of urban, smoky electropop if Give Up The Ghost is anything to go by.

Polica are a relatively recent concern, so recent that the band simply did not exist a year ago. The band is essentially a collaboration between frontwoman, Channy Leaneagh and Ryan Olson; the two previously working together as part of Minneapolis neo-soul outfit Gayngs, whose collaborators included the aforementioned Mr. Iver. With Olsen solely on production, Leaneagh is very much the frontwoman of Polica and the undoubted star of the show on Give Up The Ghost as her vocals cut through every track, drenched in heroic amounts of Auto-Tune.

Auto-Tune, as a technique, became so ubiquitous, it almost devalued the effect; Leaneagh drags it right back into the limelight, deploying the Auto-Tune as an instrument in itself throughout the album, a voice that seems entirely disembodied and remote from anything else. Using the Autotune as an instrument in its own right creates a constant stream of modulation shifts, twists and turns, creating a lineage of otherworldliness throughout which never falls into the trap of gimmickry.

Lead single Dark Star is, by nature, the most accessible, a big, fat rush of those ever-rippling vocals – like a submerged and multiplying Florence Welch – and an extended crescendo for an outro, with sudden brass clarion calls and a lush, pounding groove. The long-winded codas to each of the tracks on Give Up The Ghost add an ominous quality to the album, with hugely dramatic drum rolls exploding through the dense, layered electronics of the magnificent opener Amongster, a trick repeated to equally thrilling effect on Lay Your Cards Out.

This lineage ensures the album works best listened to in its entirely rather than separating each cut from one another. The increasingly imposing presence of Leaneagh suggests a more ethereal Zola Jesus straining to break through the suffocating soundscapes. Form approaches a dub sound with the piano motif heavily steeped in reverb and the hi-hats spitting and spluttering their way through Lanegan’s wandering vocals. Closing track Leading To Death is the most explicitly electronic on the album, the multi-track vocals overlapping with the searing, buzzing synths before the drum flourishes bring everything tumbling to a climactic conclusion.

More on Poliça
Poliça – Give You The Ghost