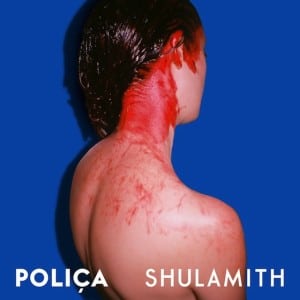 Released early last year, Poliça’s debut album Give You The Ghost was one of the most surprising success stories of 2012. The Minneapolis four-piece earned praise from critics and artists alike for their moody, atmospheric R&B-inflected pop, including from names such as Bon Iver’s Justin Vernon and Jay-Z. They quickly became the year’s The xx, balancing their unique and individual sound with overwhelmingly positive reviews.

However, with success comes a great deal more focus, as well as a pressure to live up to that early standard – something The xx were also forced to cope with in the lead up to their second record. And considering the reception that greeted their debut, Poliça were very much in that same boat when it came round to recording their follow-up, Shulamith. Yet, any concerns that they might not be up to the job are quickly dismissed by the album’s first single, Tiff.

Featuring a guest appearance from Justin Vernon, the song sees expansive synths swarm around the sultry vocals of Channy Leaneagh – who originally founded the band with producer Ryan Olson in 2011 – as she sings: “Carrying round a prison bar/ fucking in the feathered tar/ early call the master flirts/ measuring up the pretty girls.” Despite being darker and even grittier than anything on their debut, the song is still irresistibly addictive.

As with its predecessor, Shulamith is a quirky and very eclectic album. This is made clear from the very start, with opener Chain My Name combining a multitude of electronic elements, including a sparse clap beat and frenetic synths. Very Cruel continues to demonstrate Poliça’s unorthodox approach, as sharp, stabbing synths complement Leaneagh’s distorted vocals.

The album’s most recent single, Smug, is more melodic, and as a result, aligns itself closely with some of the more infectious moments on Give You the Ghost, such as the mesmerising Lay Your Cards Out. “Red lips upon your suit/ no bother I’m through with you/ trying to keep a few on the side/ baby you could never lie,” Leaneagh intones, with the song’s evocative lyricism working perfectly in conjunction with the brooding and highly unsettling synths.

Elsewhere, other notable highlights include the dreamy soundscapes of Matty, with its searching synths slowly ebbing and flowing in an almost hypnotic fashion, and Warrior Lord, which is fairly stripped back by Poliça’s standards. The latter, in particular, rests completely on Leaneagh’s mellow vocals – which are simultaneously affecting and intoxicating – as the occasional stroke of instrumentation wonders around aimlessly in the background.

Yet, while Shulamith follows on nicely from Poliça’s debut album, their reluctance to move too far away from their established polyrhythmic sound does result in a rather indistinguishable second half. Songs begin to roll into one another as the record nears its conclusion, with tracks like Spilling Lines and Trippin undoubtedly coming off worse when compared to Tiff, which is very much the album’s centrepiece.

Another issue is the length, with only two of Shulamith’s 12 songs coming in at under four minutes. Unlike Give You The Ghost, it is an exhausting experience to sit through the entirety of Poliça’s new LP and there is a case to be made for a bit more variety. However, when the band do change things up, as they do on the disorientating Vegas, the potential is clear.

Give You The Ghost was always going to be a tough act to follow and, for the most part, Shulamith does a solid job. While Poliça’s sound is by nature very melancholic, the record does have a tendency to drift from song to song, and that is probably its biggest downfall. Yet Shulamith can still be considered a worthy addition to the band’s back catalogue, even it just doesn’t quite reach the heights of their excellent debut.