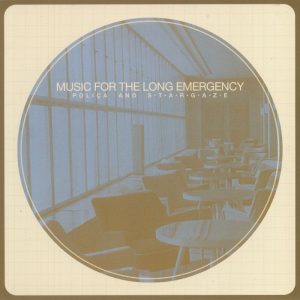 Music For The Long Emergency is the second collaboration between Poliça and classical ensemble s t a r g a z e, the first being Bruise Blood, a reimagining of Steve Reich‘s Music For Pieces Of Wood.

There is a point on this record where that piece is recalled: the moment in How Is This Happening when the music shifts from warm and keening to cold and insistently percussive.

And just as that track is one of two halves, so is this album. Five pop songs, coloured in various shades of darkness, are backed by two longer pieces: How Is This Happening is the more avantgarde of the two, while the title track builds from an opening of ambient gloom to a more optimistic sound.

The s t a r g a z e contributions are for the most part interwoven so neatly that it’s hard to identify where Poliça ends and they begin. The introduction to Speaking Of Ghost is the only point that sounds conventionally orchestral, and that’s in fact a refreshing moment of clarity after the uncomfortable, distorted Marrow.

Cursed is the other moment where the sounds shifts strikingly – and in this case less effectively. While it’s a decent drum ‘n’ bass track in its own right, it’s out of place here. But it’s a rare misstep in an assured record that brings out the best of both collaborators.