Poliça – When We Stay Alive 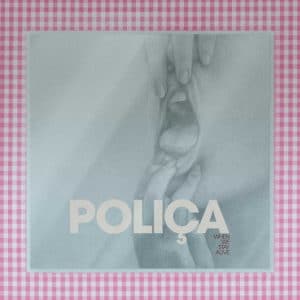 At the very base level, if there’s anything to to be learned from Poliça‘s latest album, it’s that you probably shouldn’t try to clear snow and ice off your roof. It’s a lesson that Channy Leaneagh could quite happily teach, as back in 2018 she managed to tumble from her roof while doing just that, and damaged her back to such a degree that she ended up in a brace and endured limited mobility for a considerable period.

However, Poliça’s forth album When We Stay Alive is more than just another album of wonky pop electro, for here is a lesson in healing. The focus is not on physical rehabilitation. Rather, Leaneagh found her time in convalescence to be a mentally liberating experience, allowing her the time and space to examine the experiences that shaped her. The breaking of her back allowed her to assess her life and wonder whether it was possible to live a life that is not burdened by the past. The result of that meditation is an album that deals with themes of loss, loneliness, healing (both mentally and physically) and, most importantly, the determination to carry on. There is much to learn, and be supported by on When We Stay Alive.

Not that it’s particularly easy to pick up on these themes. At times, Leaneagh’s vocals are difficult to grasp, barely flitting across the part of the brain that converts sound into recognisable forms and disappearing before there’s any chance of making sense of it all. Sometimes the lyrics of these songs are delivered in a way that barely resembles the shape of language. Instead she inhabits a curious world generally devoid of consonants, making her presence on the record one of either percussion (TATA) or as a spectral force that veers between a series of contrasting emotions, conveyed only through the feel of her delivery. At times she seems demure and beautiful, at others, turbulent and evil. When pitched against a dark and brooding musical backdrop, the effect can be genuinely traumatic. Fold Up positively seethes at times, with aerated electronic noise cutting across a vocal that highlights Leaneagh’s loneliness, post-fall. “I guess I knew that I would fall,” she sighs, “I’m lonely in my bed,” as the song becomes ever more threatening and terrifying. Dark and oppressive, at times it sounds like the darkest recesses of Portishead‘s Dummy. It’s that good.

Blood Moon is a lighter take on loneliness, love and death, but there’s a kind of acceptance at play in Leaneagh’s lyrics. It’s possible to be on your own, but never actually alone. “Every night is precious, I’m dying soon” should, in less capable hands, be utterly depressing, but there’s a genuine warmth and beauty as Leaneagh sings “just dance, you won’t be lonely now”. It’s the kind of positivity in the face of loss that brings a lump to the throat.

Steady is perhaps the most organic song on the album, sounding like an old Joni Mitchell tune adorned with synths. Yet its title is at odds with its content; Leaneagh seems to be feeling anything but steady as her life progresses. It’s an almost cute song at times, with its imagery of blowing bubbles and chasing birds. Uncertainty lurks everywhere though, with Leaneagh lamenting “I’m all alone, don’t got no-one to call to drive me home”. If When We Stay Alive proves anything it’s that she’s a master of juxtaposition and playing with signifiers.

There’s a depth here that is surprising considering how sparse and barely-there everything seems to be. Arrangements are at times skeletal, only really gaining flesh on the bones when really necessary. If Leaneagh appears to be wispy vocally, then it’s worth noting that the emotional heft of the subjects and the personal content that she covers puts a surprising amount of flesh on the bones of these songs. It’s also a testament to the strength and willpower of Channy Leaneagh. When We Stay Alive is an illusion of a record but, once explored, an apparently endless labyrinth unfurls.