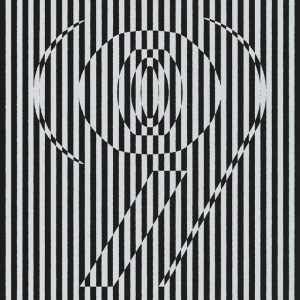 Inventively titled 9, Pond’s ninth studio album was shaped differently to their others. Claiming they deserved a shot at chucking something together from lengthy jamming sessions where tracks were gradually moulded into songs after the release of several highly polished collections may be fair enough, but without Tame Impala’s Kevin Parker on mixing duties for the first time in over a decade, the sheen is missing, and the free rein clearly showing.

Frontman Nick Allbrook wanted to create something “completely fucked” as he “loves divisive music”; accordingly, 9 is guaranteed to split opinion if you’re a die-hard fan of the Australian band’s thick layer of psychedelia and fuzzy warped production that Parker encouraged when around. Lead single Pink Lunettes, a track Allbrook has claimed is “abstract messiness”, does little to draw you in: set to a racing beat, experimentation and the creation from a jam is crystal clear, the beat obviously laid down as a starting point and peppered with lyrics, remaining in a jam state that doesn’t really go anywhere over the course of almost six minutes.

It’s not the only time we are left in little doubt that a track’s origins are similar. America’s Cup is one of the collection’s better moments, but you can almost feel present at the original session yourself as the heart of the cut is built from a monotonous epicentre. The added chorus isn’t wildly impressive; it’s more like their standard fare but it doesn’t quite ignite the senses, sailing a little off course in the process. Rambo is another track where vocals sound more familiar and the calypso-like beat is certainly different if not endearing, the chorus being easily identifiable as Pond.

During lockdown this approach was forced upon many bands, as opposed to being a chosen route, so it’s not an unfamiliar scenario. Happening at a time when they had just dumped all their equipment into a studio also did little to hinder them, giving them a chance to focus on something that involved little contact with the outside world. Human Touch sheds some light on what had been missed during the days of closed doors through its lyrics of “I let her use the toilet in my place,” as loneliness that we will all have felt left us craving. “I need static, ecstatic,” sings Allbrook, pushing the requirements a little further than just touch, you feel.

However, too many of the songs fail to deliver the mind blowing moments that the band have been capable of in the past. Gold Cup/Plastic Sleeve is duller than a grey day in the greyest town in Greyshire, Greyland until a rousing chorus finally brings the light, soaring in comparison to the opening, a decent guitar solo helping it along. Czech Locomotive – written about a long distance runner – similarly takes almost three minutes to get going, which is hardly a trait of a locomotive; more like a stuttery old banger with a knackered starter motor.

The album’s undoubted one moment of sheer class happens in its first few seconds, that being the exquisitely spellbinding opening vocal on first track Song For Agnes, contributing to a cut that sounds like Arcade Fire and Sleepy Sun have been melded into one entity. Again, it feels like a jam in the main, but it’s by far and away the most riveting moment on the entire album. At the other end, closer Toast is instantly recognisable as a closer from its opening bars – it had literally nowhere else to sit on the album – being a clear wind down, although what exactly it’s winding down from is a mystery.

Jamming sessions can chuck out some amazing tracks and have done so over the years, with Can being a reference point Pond have stated as influencing 9. Can, though, were masters of the art and it’s also the best part of 50 years since they delivered their classic cuts which were, at the time, also quite a new thing. Pond may well have earned the right to try a different approach; after all, music isn’t particularly made for others but for those making it. But the attraction of 9 for others might not be as great as that which has gone before.