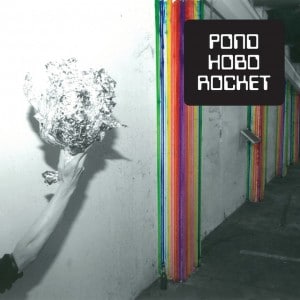 With Tame Impala trailblazing the way across the globe for Australian psychedelic rock, their less heralded Perth cousins Pond have been consistently releasing similar neo-psychedelia since their 2009 debut Psychedelic Mango. Indeed, no sooner than Hobo Rocket hits stores but another album is due to swiftly follow, with Man It Feels Like Space Again having been part recorded at the same time.

There are strong ties between the two Perth bands, with two of Pond’s current line-up also being members of Tame Impala; a third, frontman Nick Allbrook, recently quit his Tame Impala bass duties only to be replaced by another Pond member, the non-bassist Cam Avery. But Avery not being (primarily at least) a bass player doesn’t seem to be an issue because, apparently, “that’s how they roll” and instrument swapping is the norm.

2012’s Beard, Wives, Denim was warmly received; containing gems such as Moth Wings with its distinctive wah-wah guitar and falsetto vocals, the difference between the two bands is more to do with Pond’s tendency to mix things up a little – variety and risk-taking is evident, whereas Tame Impala tend to stick to what they’re best at. This leads to Pond’s output being more intriguing, mysterious and downright unpredictable.

Hobo Rocket lifts off with the curiously titled Whatever Happened To The Million Head Collide. Gentle ambient tones open the track before a didgeridoo sounding bass beat pins down the opening. This develops into a sudden fuzzy guitar riff recalling Black Sabbath as the track takes another early turn. Vocals drenched in reverb, thunderous drumming, stabbing piano and that ominous riff provide an altogether cataclysmic sound before brass awash with accompanying swirling synths complete this psychedelic beast.

Lead single Xanman follows with its heavily distorted vocals and repetitive riff being the driving force to another psychedelic treasure, sounding something like T-Rex in an echo chamber on acid in the process, with the swirling cacophony of sound washing over the listener in waves.

Odarma opens to much quieter and serene surroundings, like a drowsy half-awake state of mind with acoustic pluckings accompanied with more reverb soaked lead vocals surrounded by soaring, swirly backing vocals and occasional electric guitar. After a slight pause the pace picks up to provide another sublime, psychedelic-heavy dream-pop masterpiece.

Alone A Flame A Flower bursts into earshot with another Sabbath-like riff and ensuing wall of sound; the foreboding flavour of the song brings the happy, druggy element so far evident on the album to a grinding halt – although midway through the track the pace becomes frenetic as does the distorted, almost tortured vocals.

Another dollop of woozy psych-rock adorns another highlight in Giant Tortoise; with soft dreamy beginnings the track floats along gently until a dramatic guitar riff gatecrashes the sleepy section to provide an instrumental chorus. The title track follows and is another of the off-kilter yet strangely compelling moments; a rocket countdown identical to The The’s I’ve Been Waiting For Tomorrow For All Of My Life – albeit including the ‘7’ in the countdown – starts the track before, essentially, a driving psychedelic instrumental takes over. Vocals, of sorts, are provided by ‘Cowboy John’, a psychiatric patient the band have somehow ended up befriending. The track ends in hilarious circumstances as Cowboy John clearly states in a discussion with one of the production team that he won’t be re-performing the vocals as one take was enough.

With closing track Midnight Mass being only the seventh on the whole album there is evidence to suggest this is more of an extended EP than a full album. Once again the track comprises of startlingly individual song sections, varying between the subtle and dreamy to heavy psych-rock, with the addition of skeletal keyboards sounding like something from Get Carter (the original) and the swirling instrumental ending.

Whilst Tame Impala continue to grab the headlines, this same group of friends that are (mostly) responsible for Pond’s output plug away seemingly outside of the confines that Tame Impala tend to operate within. The prolificacy is undoubted, and at times the quality is unequivocally intriguing. But with the tendency to occasionally experiment and deviate, consistency is not forthcoming; that said, when Pond hit the right notes they soar, and being comparatively young there is clearly more to come from a seemingly bottomless well of delights.