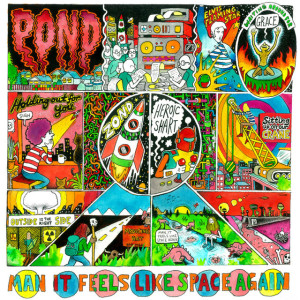 A lot is made of the relationship between Pond and Tame Impala, with the former often referred to as an offshoot or a side project. Whilst it is true that both bands share members to the point where they seem almost interchangeable, it’s not entirely correct that one is the offshoot of the other. The relationship between the bands seems not unlike the one that existed between James Brown and Parliament. Brown’s musicians were expected to be tight and rigid, revolving around a central figure; George Clinton’s Parliament would give those same musicians the opportunity to still be funky, but in a cosmic sloppy way.

Pond then are the psychedelic starchildren; the celestial cousins of Tame Impala. Restricted only by the time that the members can commit to the band due to other commitments, they are, none the less fairly prolific. It would seem that the limits placed on the band ensures that their music is inspired and freewheeling. Man It Feels Like Space Again is an album awash with influences, genres and wrongheaded ideas. Sometimes the songs misfire or don’t quite work, but such is the sheer joy and spontaneity contained within these songs that it hardly matters.

Trying to pin the band down is an entirely fruitless exercise; they flutter freely across supposed boundaries at will. It’s not all wide-eyed wonder however, Man It Feels Like Space Again is very much an album of contrasting moods. There’s the over-excited, throw-everything-into-the-mix space-rock genre bending extravaganzas and on the flipside the more introverted, but still throw-everything-into-the-mix space-rock ballads.

When the two approaches come together (which is surprisingly rare), Pond are utterly thrilling. Waiting Around For Grace is a perfect example. It begins like a heartbreaking Mercury Rev song (circa Deserter Songs) before opening up into a stomping glam rock behemoth that finds common ground with T-Rex, Thurman, and the glorious pomposity of Jeff Wayne’s War Of The Worlds. Elvis’ Flaming Star is more bullheaded and straightforward by comparison. Initially it is a lot tighter, and mixes the space dust with an insistent backbeat that simply just wants to dance, making it perfect single material. Upping the ante further is Zond, a sugar rush of a song that aims for wonky electro pop but just falls heroically short by sounding just a little bereft of ideas (not an accusation that could be readily aimed at the rest of the album). Outside Is The Right Side channels the spirit of Parliament but sadly just misses the boarding times for the mothership.

The contrast to these energy soaked rock songs is contained in the hazier, more contemplative moments. Heroic Shart (yes, really) is a reverb drenched hymn that almost loses its mind in the swirling mists of sound. Holding Out For You is in the same headspace The Flaming Lips occupied a few years ago, when they were happy exploring the firmament rather than disappearing up one. Gentle melodies cascade over a ramshackle backbeat. It might sound homemade and fraying around the edges at times, but these qualities make it so affecting; the soaring keyboards and Nick Allbrook’s vocals give it a further, emotional gravitas.

Sitting Up On A Crane swirls in a soft focus haze beautifully, the vocal melodies digging deep as the delicate guitars shimmer. That the main vocal bears a passing resemblance to Sloop John B is perhaps not unintentional as Jay Watson croons “all I wanna do is get is drunk and listen to Dennis… Wilson”. It’s the beautiful depths of Pacific Ocean Blue that Pond are aiming for here though. The title track is perhaps the best example of what Pond do so well. An eight-minute plus extravaganza, its influences are considerable.

There’s elements of The Beatles (LSD period), prog rock indulgence (think Hawkwind banging a Gong), Bowie, space funk, folk, and electro-pop running throughout. Yes, it’s a mess but somehow a thoroughly glorious and jubilant mess. In other words, it’s a perfect encapsulation of everything that Man It Feels Like Space Again is.