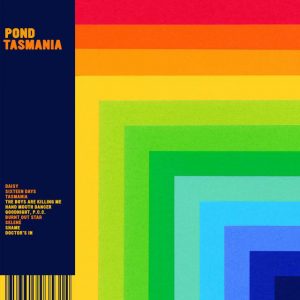 Pond’s eighth full length studio collection Tasmania sets up camp within the beliefs of many, with, in this instance, an Australian focus: there are troubles in the world and this planet is teetering on the edge of colossal changes. The Mayan calendar, astrological pointers, melting ice caps and even the Bible suggest these changes are coming – too many references all converging into one point to be a coincidence, one would think.

According to a conversation frontman Nick Allbrook had with an environmental science type, Tasmania will be the last remaining place in Australia before the continent becomes uninhabitable. Take all this into account and things are looking gloomy for the record, then.

Contrastingly, it’s not as bleak as you would expect, although it’s best not to get too hung up on deciphering lyrics. They are, in the main, puzzling, aside from the clear message of “I might go shack up in Tasmania before the ozone goes and paradise burns in Australia” during the funk-filled soul of its title track. The line also reappears during the album standout track Burnt Out Star, just in case we didn’t get the message the first time; the track itself is a top drawer eight-minute epic that traverses a course through bubbling synths, spellbinding vocals and a kicking drumbeat that, when it arrives, sends the track soaring. Closer Doctor’s In also borrows from its peers, this time it’s the melody, but it’s so compellingly stunning it has that elusive Holy Grail of elements vital to a closing track in that it makes you want to immediately spin the disc from the beginning again.

The snakey, mesmerising Goodnight P.C.C. namechecks a sleazy part of Paris for another highlight whilst a tribal drum pattern that would fit perfectly within a native North American Indian movie forms the track’s spine alongside a stripped down, basic Casio keyboard-like synth and spacey interlude that lead to a majestic climax. Album opener Daisy is the most accessible, poppy track here with verses sounding akin to an Arcade Fire number although it feels out of place within the collection.

Elsewhere, trademark thick synths and unique electronic sounds emerge during Sixteen Days, and Selené dips its toes into similar waters alongside squelchy mid-1980s synths but they don’t excite in the same way as the album’s best tracks. The minimally backed Shame throws out something different whilst Hand Mouth Dance borrows the beat from John Parr’s St. Elmo’s Fire and embellishes it with more of those thick synth swathes.

Despite some excellent high points, Tasmania appears jumbled as a whole and there are too many tracks that just don’t hit the bullseye for it to be upheld as the best Pond have recorded. With ex-member Kevin Parker of Tame Impala producing once more, it probably helps boost individual tracks but there’s also an inevitability about things that mean we can’t quite escape that Tame Impala shadow of psych-majesty that continues to loom over the band like a constraining veil.