by Andrew Hall
published: 5 May 2017 in Album Reviews
Tweet 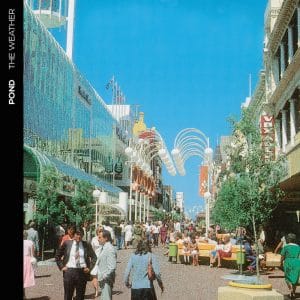 “I’m sorry to all the long-haired Pond fan dudes out there in advance who’ll probably be like ‘fuckin’ Kevin’s ruined Pond… they’ll probably be doing something with bloody Lady Gaga soon,” said frontman Nick Allbrook at the start of the year when asked to give an update on The Weather, the band’s seventh LP. “I’m sorry everyone but it’s not Kevin’s fault – we just like pop music.”

Pond are forever associated with Tame Impala‘s Kevin Parker – various members having played in his live band, Parker consistently offering his production services in return (he’s behind the desk again here) – and it would be easy to assume that Parker’s trajectory from psych-rock bedroom auteur to festival-headlining, long-haired groover of future R&B and go-to guy for Gaga and Mark Ronson has had an influence on his less studious, more happy-go-lucky buddies.

But, in truth, Pond have long been on a similar (chill)wavelength – more drawn to the extravagance, creativity and malleability of Prince, Andre 3000 and alternative R&B than Cream, Pink Floyd or any number of neo-psych proselytes. “It’s been years (since we listened to psych rock),” Allbrook has said, “but we came together and learnt how to be in bands when we were obsessed with that music so I could try and make a full Detroit house record and it’d still probably come out sounding like psych white-guy rock except with a more propulsive beat.”

Previous LP 2015’s Man It Feels Like Space Again saw Pond adding synths to their sound palate on tracks that were as deliriously vivid and attention-grabbing as its Cheap Thrills-meets-Where’s Wally? sleeve. On Sweep Me Off My Feet, the first taster from The Weather, they perfect this ‘psych white-guy rock except with a sensual, 1999-via-The Love Below gloss’ sound; it’s the brightest, most exuberant thing they’ve done, in possession of a knockout chorus (“I am not an angel, I’m barely a man,” sings Allbrook, cast as “a lonely guy with longing in his eye.” “Baby, understand!” he pleads). Paint Me Silver, meanwhile, with its soft, sultry vocals, could only be more indebted to Prince if it was called Paint Me Purple.

The idea that Pond have gone all-out pop, however, is misleading – the two aforementioned tracks being comfortably the two most approachable moments on the record. Opener 30000 Megatons is far more representative: a histrionic hit of prog-pop evoking ELO, Jeff Wayne’s War of the Worlds and Suede circa Dog Man Star. “This song was going to be released with the rest of the album,” read a statement from the band when they shared the track the day after Donald Trump became President Elect. “But today it seems like the right time.” References to a population “baser than the base, deaf and dumb and blind” and a “sunburnt country” are apparently aimed at Pond’s homeland of Australia, but could just as easily apply to America under the perma-tanned Trump. Allbrook, sounding uncannily like Brett Butler, is at the end of his tether at the end of the world, his finger on the nuclear trigger: “Push the button now!” The bass, as it is for the majority of the record, is deep and thrumming. The track ends with mournful synths and birdsong.

On the startling, Sir Ian McKellan-referencing Zen Automaton, Allbrook again appears to be channeling Butler, committing wholeheartedly to preposterous lines like “shooting lightning from his eyes all across the Burmese crowds.” Edge Of The World – presented in two parts, prog fans! – tackles the “seven sins of Perth” and “all the weird contradictory things” that make up so many other colonial cities. Shiny chandeliers and polished steel buildings are designed to dazzle and distract and transform the landscape beyond recognition: “Lest We Forget, lest we regret out bloody past.” Part One has an alienated feel and bombastic conclusion, complete with keyboards that resemble blaring saxophones, while the climactic, anthemic repeating line pattern (“If the cokeheads get you down… if the white guilt gets you down… if El Niño gets you down”) of Part Two apes Pink Floyd’s Eclipse; it’s easy for people to bury their heads in the sand, it’s suggested, safe in the knowledge that “we’ve got the water, we’ve got the water for now.” “I’d actually rather we didn’t talk about it,” says a recorded female voice. There are Ariel Pinkish hues to Colder Than Ice, with chopped-up news snippets reporting an alarming rise in the use of methamphetamine (“a highly addictive stimulant”) in Perth. One can only assume that Pond were shooting for Pink-style irony in making a song called Colder Than Ice sound quite so uncool: the synths are garish, the saxophone queasy; it’s a bad trip.

The Weather is packed with ambitious moments like these, and many of them go over really well. We get a few hints of the wild, careering Pond of old – quite literally on the “A” side of A B which features a jarring interpolation of Man It Feels Like Space Again number Elvis’ Flaming Star. Every so often, a humorous or madcap lyric leaps out amongst the gloom and acts as a reminder that the band’s previous album included a track called Heroic Shart. Take this memorable section from Sweep Me Off My Feet, for example: “Between my penis and my chin is Camembert and shame, I used to be elegantly thin, I’m sorry babe, we both missed that train.” “We’re all just a waste of good meat in a godless world, throw my carcass in a wheelie bin,” raises a smirk during Edge Of The World Pt. 1; elsewhere, a dystopian near-future is depicted where characters drink Bollinger on the moon with Virgin Galactic mastermind Richard Branson. The album’s weakest moment, All I Want for Xmas (Is A Tascam 388), is less a song, more a selection of goofy sound effects of the kind you’d expect an amateur band to produce, given unlimited access to the titular portable studio and Grade-A marijuana.

The Weather ends with its title track. A gorgeous tune is juxtaposed with a scene of pure horror: champagne-soaked floors; blood-splattered clothes; a man clinging on desperately to visions of a woman having been beaten up and blinded by corrupt cops. Pop it most certainly is not.