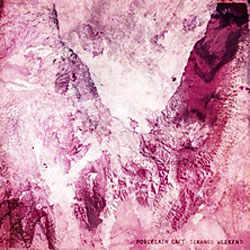 Porcelain Raft. The moniker calls up something overly clumsy, sort of a life vessel that just doesn’t work, a hobbled rescue vessel in constant need of a bailout, floating and sinking simultaneously upon a gauzy, dreamy seascape under passing cloud-puffs and setting suns, shining white porcelain gleaming and glinting even as it weighs down and dooms its rowing refugees. In reality, we’ve got Italian born one-man wonder Mauro Remiddi, recording alone in that most DIY of locales, a New York basement.

Remiddi used to front the perky indie-pop band Sunny Day Sets Fire, but now he’s doing his own thing, and it works well for the most part. Strange Weekend, his debut solo album, fills a particular niche in the new, frontier world of bedroom-pop. Certainly, comparisons to Youth Lagoon are fair (though Remiddi’s tenor sounds a bit more confident than Trevor Powers’, ranging into falsetto only occasionally, as on The End Of Silence), while chillwave and trip-hop are also worthwhile labels. But it still feels a bit early in the movement to start lumping artists together; we’re still forming an archetype here.

Porcelain Raft does its own thing, reworking standard bedroom-pop ingredients into something compelling. Atmosphere reigns here, but that doesn’t mean the vocals are completely shrouded in reverb. The beats are glitchy, sure, and the synths could be described as washing, or even undulating, but there are also guitars and vocal harmonies. And Remiddi’s hit on a precarious balance between impassioned pop exuberance and chilling detachment.

Strange Weekend sort of writhes out there on its own, shifting haphazardly between psych-pop, shoegaze, and straightforward pop, and at the center of it all, Remiddi demonstrates a formidable skill at song craft. The opener, Drifting In And Out, sets an auspicious tone for the album, feeling at first like a Neon Indian carbon copy, and even when Remiddi’s voice comes in, there’s not much to hold onto. But by the time the soaring falsetto and driving guitar come in, it’s obvious that this is an album worth spinning to the end. Is It Too Deep For You is all stereo separation and impossibly saturated reverb, creating a sort of haunting, dreamy expanse.

Standout track Put Me To Sleep utilises strange effects and noises over a basic pop progression. If John Hughes had lived to make movies for the Facebook generation, this very well could have soundtracked the first romantic encounter between the oafish jock and the coquettish popular girl (and this is meant in the best way possible). “I need you now. I hope you understand,” Remiddi sings. It doesn’t get much more archetypal than that.

Porcelain Raft has got a bit of an uphill battle to fight through a blogosphere already clogged with similar acts. But where, say, Youth Lagoon may come off as too emotionally charged one-dimensional, and Neon Indian as too spacey and synth-heavy, Remiddi shows an impressive range of expression and a wide variation of musical approaches. Strange Weekend merits return visits, and it rewards close listening. Someone out there will find a new favourite song among these tracks.