Portico Quartet – Art In The Age Of Automation 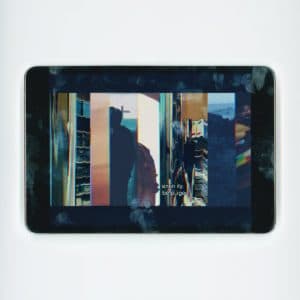 It is nearly a decade since the distinctive, enchanting sound of the hang pulled many of us in to the world of the Portico Quartet for the first time. Since then the group have developed more of an electronic foundation for their work. The line-up has changed, and while the hang remains an integral part of their sound, the rhythms elsewhere have assumed more prominence. Six albums in, they now speak with considerable musical authority. And after a dalliance as a trio, they’re a quartet again. What’s changed?

The first point to note is that the hang, intrinsic in real and sampled form since their formation, has not lost its appeal, underpinning as it does the attractive Endless and providing soothing, mellow percussion elsewhere. Almost immediately the latter becomes clear in the importance to the group of saxophonist Jack Wyllie, who makes full use of the audio space open to him, constructing expansive and rather beautiful treble lines. The instrument floats over the top of compact loops on Beyond Dialogue with a glorious, open melody, but it also occupies muted parts in the middle ground, showing its versatility. Vine also elevates Rushing to a serene plain, though the beat that comes in after his emotive solo is rather busy in response to his thoughtful dialogue.

Elsewhere the group’s quality of orchestration is key, the silvery strings setting the wispy outlines for Objects To Place In A Tomb, while Endless pans out as though providing the soundtrack to a set of opening credits – a spy drama, perhaps. The influence of minimal composers such as Steve Reich and Philip Glass is touched on in the consonant clusters of harmony the band use, while the soft focus of the instruments is countered by busy percussive tracks.

Good though all of this is, the album doesn’t consistently hit the top line, and this is where the ‘serious’ Portico are less memorable. Their music is always beautifully rendered, and there is plenty of interest for the listener, but the hang, their most distinctive weapon, feels underused, its tones not bought into the foreground as much as might be expected. This is understandable from a group looking to assert their worth in the wider electronic music sphere, looking to avoid becoming a one trick – or instrument – pony, but the hang’s appealing and often quirky sound, even six albums in, is surely their best calling card, a crucial piece of identity into a crowded area of music.

That said, if you didn’t know the history of Portico Quartet and approached this album from a Bonobo/Bibio standpoint, you would be happy to make and keep its acquaintance. Portico Quartet are still making quality music, but it is to be hoped they will play more obviously to their strengths now their line-up has settled again. The saxophone is the main reason to buy this record – and how many records can you say that about. But hang tight, as they might say; now they’re re-established, Portico Quartet will push on from here.