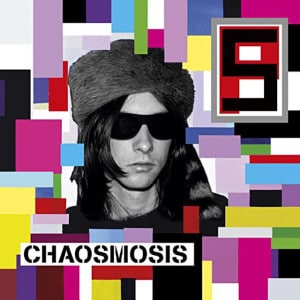 Their wild, thrillingly unpredictable years of experimentation may be well behind them, but after three decades Primal Scream are by no means a spent force. Their last album, the excellent More Light (2013), showed the band re-energised following a stale period. Now, their 11th studio album moves away from that layered psychedelic rock texture to a lighter, cleaner-cut sound. Mainly recorded in Stockholm with co-producer Björn Ytlling (of Peter Björn and John), this is their music at its shiniest and poppiest, though the lyrics still reveal disturbing undercurrents.

Using French philosopher/psychotherapist Félix Guattari’s term ‘chaosmosis’ (describing how our subjective vision of the world is conditioned by social forces) may seem pretentious, but it sort of fits the band’s famously kaleidoscopic absorption of influences. Over their career, they’ve shape-shifted from jangly Byrds-esque folk-rock to acid house and from raunchy Stones-like blues-rock to ambient dub. Here, the songs of frontman Bobby Gillespie and guitarist Andrew Innes mix in some off-kilter electronic and dance elements, but Chaosmosis is the closest to a mainstream pop album the band has ever released.

New single I Can Change presents Gillespie in a higher, more soulful register as he asks for help in conquering his addiction: “All the pain that I caused/All the time that we lost/Drink and drugs, self-destruct.” Here, Martin Duffy’s floaty keyboards are briefly joined by melodic flute. The ballad Private Wars also sees Gillespie looking for release from his demons: “Time to let it go … ease your heart of rage.” Acoustic guitars are accompanied by strings, while Rachel Zeffira provides soothing backing vocals. Where The Light Gets In – the more upbeat lead single – features Sky Ferreira in a call-and-response duet with an optimistic message: “peace begins within”.

But the atmosphere turns darkly brooding in When The Blackout Meets The Fallout, with its short, aggressive blast of industrial electronica reminiscent of XTRMNTR (2000). Golden Rope is psyched up rocktronica with a gospelly “Hallelujah” bridge, as Gillespie sadly closes out with the refrain “I know that there is something wrong with me”. Finally, the New Order-ish social commentary Autumn In Paradise is the most political song here: (“There’s a factory that’s empty/No one works there anymore/Down a street are broken families/Dreams are in the trash.”)

Overall, though, Chaosmosis is a hopeful album of personal renewal, painted in bright pop colours with a few darker hues as contrast. Compared to some of Primal Scream’s bold ventures in the past, it may be a bit lightweight, but it’s full of effervescent appeal.