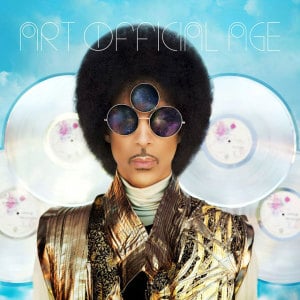 Prince has been a big noise in the music industry long enough to know how to work it to his advantage, and Art Official Age arrives after an extensive period of teasing from the Purple One. There was the Glastonbury kerfuffle – the ‘will he or won’t he headline’ question lingered on lips for weeks. Prince really took his time before destroying the rumour, all the while teasing fans with surprise shows across the UK and America. During these appearances he introduced his protégés, the all-female funk rock band 3RDEYEGIRL, to the world. The shows whipped up excitement and brought attention back to him, and fans and the momentarily excited stood to attention side by side to revel in Prince’s staggering live performances. Needless to say, it’s been a long summer of waiting to see what his next move would be.

And lo and behold, Prince has come back with a vengeance with his 34th studio album, alongside the simultaneous release of 3RDEYEGIRL’s album PLECTRUMELECTRUM. An artist with such an extensive back catalogue and with a formidable reputation as Prince’s is going to be faced with many an eagerly expectant fan, and at least as many a naysayers ready to shoot him down. With Art Official Age, both parties will be satisfied and disappointed in roughly equal measure. There are moments of genuine highs here that suggest a real return to form after 2010’s 20Ten album, where Prince’s ideas and creativity seem endless and his talent boundless. Yet, there are moments that seem wholly unnecessary, too.

Art Official Age gets off to an interesting start, with Prince slowly saying “Welcome home class, you’ve come a long way” over a cheesy club dance beat and then – a klaxon horn? It proves to be the prelude for an album that is something of a mess as far as ideas – and there are many – go. Art Official Age reveals itself to be the aural equivalent of a mood board with paint spilled over it. It is definitely an experiment of sounds, but it doesn’t always work. In parts it doesn’t sound like Prince. It’s hard to know exactly what it does sound like.

Fortunately, Clouds comes in and things start to pick up. It is a full on funked-up Prince tune, full of sexiness. Then there’s this odd session where a bad impersonation of an English accent informs you that you have been in suspended animation for 45 years. This narrative excess would well have been left off, for underneath it all is a fantastically sexy song. Unfortunately, it’s not the last we will hear from this weird conceptual voice.

Breakdown introduces the much stronger middle section of the album. It sees a much more honest Prince step forward, and the way it bursts into life with the introduction of the first chorus is nothing short of stunning. This really is a firm reminder of why Prince is still a big deal. It’s a heart-wrenching song of a love gone wrong, where the longing is amplified by the soaring strings, and builds to a spectacularly over-the-top climax. It’s just what fans will want to hear.

The songs that take up the middle section of this album are by far the strongest. From the full-on-funk of The Gold Standard to the laid-back r’n’b vibes of Breakfast Can Wait, this is some of Prince’s better work. It’s hard at these points to accept that he’s now 56, as songs such as U KNOW sound as though they were written for Frank Ocean or Usher. As such, they demonstrate that he still has his finger firmly on the pulse of what is happening in music today. It’s as though he’s showing how easy it is for him to make this kind of fantastically sensual and brilliant R’n’B – so easy it sounds as though he’s not even trying.

Yet, there are strange interludes of ‘affirmations’ throughout that just sound out of place and pretentious. And What It Feels Like and This Could Be Us sound like the same song split in two. Such moments let down the excellence of the tracks that make up the bulk of the album. Of course, Prince is not a man known for obeying the ‘less is more’ rule, but there are sections of this album where the excessively excessive for excessiveness’ sake draw attention away from the parts that are genuinely fantastic. Not that Prince cares what anyone thinks. He proves with this album that he will experiment and make the music he wants to make: whether it’s funked up sex songs, R’n’B vocals that challenge all before him, or his own signature sound, he’s going to keep on keeping on. We haven’t seen the end of him yet. And on the single-minded evidence of Art Official Age, that’s very much a good thing.