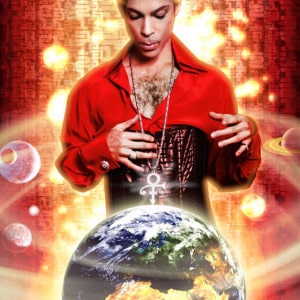 You’d have to be a cave hermit not to have heard the calamitous din of the world’s record executives throwing their toys out of their collective prams when the Sunday tabloid proudly announced that they would be giving away the latest Prince album before it hits the shops.

Never one to toe the corporate line, it appears the eccentric funkster has given a two fingered salute to the arguably complacent rip off music merchants of today. Once the domain of obscure live recordings by bands like Simply Red or Dire Straits the giveaway CD game has been considerably upped. But why, why, oh sodding why give this away with the Princess Diana/property obsessed/’Send ’em back to where they came from!’ Mail for pity’s sake?!!!!

Enough. Rant over. I sold my soul to the devil and bought a copy. I am a hypocrite. Can we talk about the music now?

Considering this is one of the most controversial albums of the year its actual content is as safe as houses. This is Prince being Prince. End of. Whilst Planet Earth doesn’t come near to the dizzy heights of the Purple Rain era it’s still got some trademark moves and is an enjoyable selection of song writing.

The title track is a simple, but effective environmental anthem (with guest appearances by former cohorts Wendy and Lisa) but the album really comes into life with the single Guitar which is a where Prince fires on all cylinders with a U2 tinged pop tune that can hold its own with the rest of his classic tracks. The One U Wanna C is also unashamedly poppy and enjoyable.

<P?Somewhere Here On Earth is a slow, romantic track elevated by some superb Miles Davis style horns and Prince even gets to rap a little on sexy and catchy Mr Goodnight. For me, the standout track is Chelsea Rodgers, which is all-out-funk with some superb vocals telling the story of a glamorous and enigmatic model.

Things fall apart at the end of the album with the last two tracks Lion of Judah and Resolution losing a lot of focus with some preachy, overblown moments. But overall, Planet Earth is a competent collection of songs that are certainly too good to be given away free. It’s an inoffensive collection of tracks that don’t require much work on behalf of the listener and sometimes that’s all you want from a long player.

Whatever the reasons for this bizarre release decision Prince has cannily ensured that Planet Earth will reach several thousands more people that his last albums put together. Sadly, the same can be said for the readership figures of the Mail on Sunday. I have to admit that I still feel a little dirty whenever I think of the MoS editor gleefully counting his circulation figures. I prefer lining the pockets of the record executives any day.