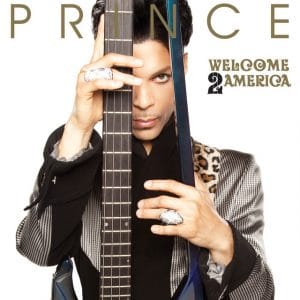 Even when he was alive, the sheer scale of Prince‘s unreleased material was legendary. Tales abound of a huge vault in the basement at Paisley Park containing over 8,000 songs – and now, 12 of those tracks have been released as his first posthumous album consisting entirely of previously unreleased material.

Well, almost entirely. Fans will remember When She Comes from Prince’s final album Hit N Run Phase 2, but it’s on Welcome 2 America as a brand new recording. There’s also the full version of 1000 Light Years From Here, a snatch of which was also heard on Hit N Run, but you’d have to wearing a special type of Prince anorak to be familiar with all the tracks here.

Welcome 2 America was originally recorded in 2010, and Prince apparently had so much confidence in it that a tour was named after the album. And then suddenly, as often happened in the mercurial world of Prince, the entire sessions were scrapped with no explanation and the results were confined to the famous vault.

Eleven years later, we have the official release, and as has often been the case with his material around this era, it’s a scrappy affair. At times brilliant, at other times anonymous, this isn’t Prince at his best, but it does make for an intriguing listen as to where his mind was at the time.

Recorded back when Donald Trump was just a loud-mouthed businessman, and Barack Obama was only one term into his Presidency, the album has a heavily political slant. The title track sounds like it could be a spiritual follow-up to Sign O The Times, with its spoken word verse and minimal backing. It’s funny to note just how much of a grumpy old man Prince sounds though – there’s moaning about iPhones, Google, celebrity sex tapes and even complaining about modern music (“you think today’s music will last?”).

It is, though, undeniably funky – a trend which continues through the album. Essentially recorded as a trio (with Tal Wilkenfield on bass and Chris Coleman on drums, and Morris Hayes filling in on keyboard) and augmented with NPG singers, it’s the sound of a band at the top of their game.

Although none of the tracks on Welcome 2 America stand up to Prince at his mid-late ’80s best, there are some songs which come close. 1000 Light Years From Here is a catchy slice of soul-pop, and Hot Summer is a typically intense jam session which could have come from the 1999 sessions. And as it wouldn’t be a Prince album without a bit of filth, When She Comes is simply Prince describing a lucky lady’s orgasm when she’s with him. These were, as they say, different times.

Rather than sex though, it’s politics that was on Prince’s mind in 2010. “Hope and change?” he mutters on the title track, “everything takes forever”. His famous running battles with the music industry also feature – Running Game (Son Of A Slave Master) takes aims at A&R men and record label executives and Born 2 Die is a sad (if drily funky) tale of a drug addict and what she does to survive.

Despite being over a decade old, none of this seems remotely dated – sadly, stories of racism and injustice never lose their relevance. The closing One Day We Will B Free is an uplifting gospel-tinged celebration, but you’ve got to rake over a fair few anonymous jams to get there – the cover of Soul Asylum’s Stand Up And B Strong is a bit anaemic, and Same Page Different Book sounds too much like what’s gone before to make much of an impression.

There’s still the casual touches of Prince genius to enjoy though – the blistering pace of Yes, which mixes up crunching guitars and cheerleader vocals to create a compelling, if slightly cheesy, new anthem or the lilting piano on 1010 (Rin Tin Tim) which seems to effortlessly conjure up a hot, sticky summer day.

Nobody would argue that anything on Welcome 2 America comes close to any of the material that Prince released in his heyday. Yet a full album of previously unreleased material from the Purple One is reason alone to get excited. If you can put aside any queasy feelings about Prince’s estate being ravaged without his permission, this posthumous release is a fine reminder of just how good Prince could be.