Princess Goes To The Butterfly Museum – Thanks For Coming

by Ross Horton
published: 7 May 2021 in Album Reviews
Tweet 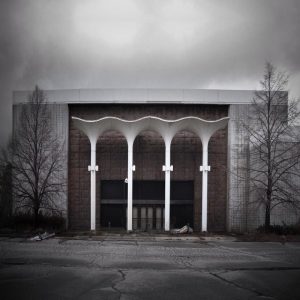 When David Bowie died in 2016 – right at the start of a horrific year for celebrity deaths – he left behind a legacy that will go unmatched in the realms of recorded music. Across almost 30 studio albums, and over six decades, Bowie created so many highlight-reel moments out of thin air that it seemed as though he might carry on doing so forever.

But it was not to be, and other than his final studio album Blackstar – which will surely one day be considered his finest – he left this world with his primary artistic concern being the musical Lazarus, a sequel of sorts to his 1976 movie The Man Who Fell To Earth (itself an adaptation of an 1963 novel by Walter Tevis).

The lead actor in the original production of Lazarus – Dexter and Six Feet Under star Michael C Hall – was chosen directly by Bowie himself as his stand-in, and the choice was inspired. Firstly, Hall has an uncanny vocal similarity to Bowie, and he has a seemingly endless supply of charisma. Secondly, Hall appears to be a kind of renaissance man, who succeeds at any and every artistic endeavour he puts his mind to.

His debut album by/with Princess Goes To The Butterfly Museum, Thanks For Coming, produced with percussionist Peter Yanowitz (The Wallflowers) and keyboardist Matt Katz-Bohen (Blondie), was therefore one of the most intriguing debut announcements of 2021. This is a man, hand-selected by Bowie for his vocal and physical star-power, releasing an album of new music, after already banking a career of acting highlights and accolades.

However, despite Hall’s voice having an undeniable brilliance, it’s in the songwriting that the new album falls a little short. The problem with it – the only, and sadly main, problem – is that a handful of the tracks here are either a little underdone, or drastically overdone, with some missing their intended target by quite some distance.

That’s not to say that there aren’t some good tunes on here. Bombed Out Sites has shades of Sleep Well Beast-era The National in its glitchy, spaced-out reverie, while Nevertheless splits the difference between Radiohead and LCD Soundsystem. The title track, with its haunted, dystopian electronic edge, is another highlight. The grinding industrial glam of Sideways almost works, but plays its Marilyn Manson/Nine Inch Nails cards too soon and dials up the intensity past an enjoyable level. It’s not as though the band can’t do that style, and do it well – the following track, Angela Peacock, does exactly what they were intending to do on Sideways, but it succeeds through carefully considered dynamics.

It’s always tempting to view actors releasing albums – or musicians becoming actors – with cynicism and contempt, especially if there’s any hint of their release being a vanity project. But one thing is clear about Thanks For Coming, and that’s despite all of its faults, there is a sincerity and commitment to the project that many new albums by established musicians are lacking. This is a solid and listenable album, with many intriguing avenues for the band to pursue in the future. Perhaps they should record the next one with a top-tier producer behind the boards to bring the best out of their considerable talents.

Princess Goes To The Butterfly Museum MP3s or CDs

Princess Goes To The Butterfly Museum on Spotify