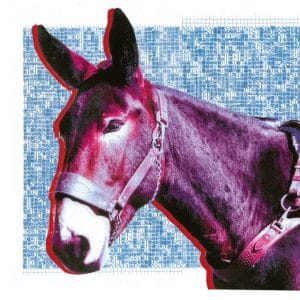 Unquestionably one of the world’s finest purveyors of existential sonic doom, Detroit’s Protomartyr are back with their first full-length since 2017’s masterpiece Relatives in Descent. Since then, they’ve seen their debut record No Passion, All Technique reissued by their current record label Domino, and they put out the fierce Consolation EP, which featured the vocal talents of scruff-rock royalty Kelley Deal (of The Breeders) on two tracks.

This new record, Ultimate Success Today, is intended to remind listeners of the urgency and vitriol of their debut, as explained by frontman and lyricist Joe Casey: “Listening to No Passion, All Technique again, I could hear myself hoping for an introduction and a long future, but also being cognisant that it could be ‘one and done’ for us. So, when it came time to write Ultimate Success Today, I was reminded of that first urgency.”

That sense of reckless abandon is here on Ultimate Success Today, but the evolution of the band has meant that, sonically at least, this is a much more advanced and progressive record than the debut. The urgent, brash post-punk caterwaul of the debut has, over time, become their very own distinctive blend of densely-layered noise rock, ominous art rock and squalid punk.

The claustrophobic atmospheres of their most imposing material are nail-bitingly tense, with the songs threatening to erupt at any second. On this new record, this palpable tension is clearest on Processed By The Boys, where Greg Ahee’s tarry No Wave guitars squall and burn under Joe Casey’s doomy, weirdly prophetic musings on whether humanity’s end will come from “a dagger plunged from out of the shadows” or “a foreign disease washed up on the beach”.

The horrifying, Evil Dead atmospherics of Tranquilizer alternate between eerie jazz and lightning-hot noise rock, and the whole thing’s eerily reminiscent of the tensest sections of David Bowie’s Blackstar. It’s as though the band found themselves playing with Bowie’s disused toys and decided to tell a terrible story with them.

But – and this is meant in the most sincere way – that’s where the height of the intensity ends. The rest of the album, all eight remaining tracks, are some of the most accessible and intimate tracks the band have ever done. Day Without End is remarkably lithe and fleet-footed, and it uses its rising tension to provide catharsis rather than terror. I Am You Now is percussion-heavy (Alex Leonard is the band’s unsung hero), and Scott Davidson’s rolling, serpentine bass figures are wound tightly around it. Ahee’s guitar line occasionally ploughs into a misremembered quote from Black Sabbath’s Paranoid, and Casey’s deranged Mark E Smith vocal offers some measure of comfort amongst all the chaos.

The band add some new strings to their bows too: June 21 could be mistaken for something by the modern iteration of The National – especially with its delicate backing vocals (courtesy of Half Waif) – if only it weren’t for the slowly rising sense of dread. Glam rock tom-tom action underpins The Aphorist, before (about two and a half minutes in) you get hit with a selection of RIFFS and the whole thing goes a bit Phantom Of The Opera. It’s genius.

The relentless momentum of Michigan Hammers is by turns suffocating and euphoric, and the same tension between white light and white heat also crops up on Modern Business Hymns. On the closer Worm in Heaven, the band offer a little respite, a little refuge, with an oddly uplifting track that evokes Nick Cave‘s The Good Son/Henry’s Dream era. It’s a surprising and welcome close to a sensational album of varying degrees of pleasure and pain.

On the album’s emotional centrepiece, Bridge & Crown, Casey sings these words: “Everybody knows/ We’re holding on to little dreams/ To drive our bodies all down the line/ ’til there’s nothing left.” In essence, this has been the true message of all of Protomartyr’s music to date, hasn’t it? They have tried to communicate, through the rawest, most sincere way they know how, that life is difficult, and that all good things – well, all things – must come to an end.

In the press release accompanying the album, The Raincoats’ Ana da Silva wrote that “there is darkness in the poetry of Ultimate Success Today… The theme of things ending, above all human existence, is present and reminiscent of Cormac McCarthy’s The Road.” To some extent, Ana’s right, but the truth is that Protomartyr deal with something that’s a far scarier proposition than anything McCarthy’s fiction has ever dealt with: real life, in the real world. Sometimes that can be the scariest thing of all, but as always, Protomartyr offer a little catharsis in the midst of it all, and Ultimate Success Today is their most cathartic statement to date.