by Graeme Marsh
published: 29 May 2020 in Album Reviews
Tweet 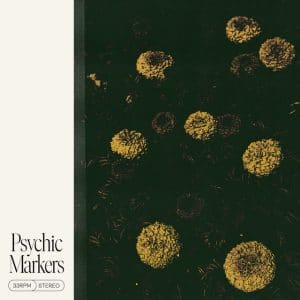 A near-death experience in a sandstorm seems an unlikely catalyst for new music, but Psychic Markers’ Steven Dove used the harrowing time he suffered in the US to reshape the band’s sound, this time going against conventional song structures and striking out in a new direction, whilst also questioning life itself.

“Cohesive yet diverse” is how the band describe their resulting third, self-titled studio album, which follows 2018’s Hardly Strangers. That record was a decent effort, even if it led to questions about the time being afforded to the collaborative side-project given the members’ own separate careers in assorted other bands. Its strength lay in its motorik beats and, when the band started to detour from the trusted Krautrock influences, things began to feel a little shaky and inconsistent.

By contrast, on this album there’s hardly a motorik beat in earshot, as they try to do things a little less expected, and the result is more of a free rein on their approach. Yet when you strip the biggest strength of anything away, what’s left?

Dove’s brush with the sandstorm is hardly an enviable one, and for those of us that can only imagine such a white-knuckle moment it seems like a logical progression to present any new music tainted with this fear in a more sinister light. And that’s exactly what happens here as a mystery-shrouded product shapes up. Opener Where Is The Prize? deploys a spidery, echoing keyboard line and brooding backbeat as visions of espionage and darkness appear in a Black Angels type guise – it’s almost the perfect track for an incognito investigative stake-out outside a drug den. The clunking industrial feel of instrumental Pulse is also much darker than earlier material, hinting at an AI-dominant, post-apocalyptic future.

Among the highlights is Enveloping Cycles. Here the band straddle early Human League beats and Kraftwerk keyboard sounds before a melody that could easily be taken from The Strokes’ back catalogue pops up alongside Wooden Shjips’ swirls and a culminating drone. Clouds is even better, its persistent beat not quite motorik but it’s as close as we get, the Soft Cell-toned keys being pushed beneath more ominous tones that then strike up a stunning guitar and synth wall of sound. It’s the kind of epic conclusion to a gig (remember those?) that sees the lead singer slink off stage after his vocal duties are complete, leaving his band mates to play out a lengthy instrumental jam for which the crowd erupt at its death. The jammed Würlitzer-like Silence In The Room is also worth catching, as a spectral vocal presence eerily swirls around the ears before its blissful all-too-brief climax.

Yet with more experimentation, some tracks are difficult to get a foothold in. Sacred Geometry is a direct product of Dove’s sandstorm moment, but its sparse, post-punk enshrouded repetitive message urging you to give in isn’t endearing. Neither is the two and a half minutes of A Mind Full And Smiling, where a more melodious hook isn’t used as well as it could have been. Irrational Idol Thinking is downright weird, a track cut in two that sounds like a pair of wobbly part-completed songs stitched loosely together, while the spoken word of Juno Dreams is frankly boring, the kind of thing you would expect to hear subliminally on a year-long trip to outer space; if you’re not already in a sleep-induced state upon take-off, you soon will be.

Psychic Markers is not marked down as a notable shift towards electronica. That, coupled with the breaking down of conventional song structures and daubing on experimentation, makes this album a less appealing prospect than its predecessor. But perhaps this directional shift denotes merely a phase born of an extraordinary event, rather than a definitive shift in direction.