Public Image Ltd – This Is PiL 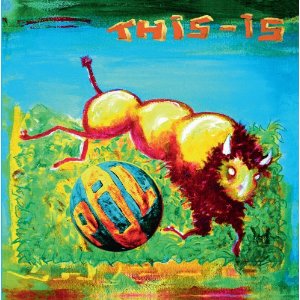 The evil jester Lydon, he comes for you with his butter ad money stacked up high and his bile and beauty just as well stocked. The greatest thing telly ads have ever done is provide John Lydon with enough cash to reboot and restock the arsenal for Public Image Ltd. The Sex Pistols were a little nipple tweak in pop history, but PiL are a Chinese burn that sticks with you forever.

This Is PiL, the opening statement of intent, with rumbling bass and solid, stately guitars, says it all. This is Public Image Ltd at its best. This record is good. Outrageously good. Better than a record of an artist of Lydon’s vintage has any right to make. Rock music doesn’t let its proponents get old and stay good. Look at the Rolling Stones: desiccated husks who are only at their best when pretending to be the young Stones, but with no decent record since the early ’80s.

One Drop, with its tinge of reggae past, is Lydon pulling at the threads of his identity again: “I am John, I was born in London, this is my culture, I am no vulture…” NO BLACKS, NO IRISH, NO DOGS. Lydon, never at home, always at home, always a hero, always a villain, always… fascinating.

The trio of Deeper Water, Terra-Gate and Human feel like long lost post-punk classics, as if Lydon just delved into a big pile of PiL and pulled out more gems. He sounds vital on these songs, so goddamn vital, a man and a band with more ideas than they know what to do with.

The Room I Am In, spoken word and odd, is one of those songs that you can pick at for a long time. Why, John? Why not. Lollipop Opera is all weird noises and distance, vocals sung through the letterbox by the weird old punk who sits at the end of the bar telling you dark tales of rockers with switchblades, the days when having an odd haircut didn’t get you in Vice but rather got you knifed.

Fool is like a torch song. It’s Lydon doing Marlene Dietrich. You can almost envisage him with cigarette holder in hand and slinky black dress on. But let’s not dwell on that image. The fact that the lyrics also include references to emails just makes it stranger. It is fascinating. The entire record is fascinating. This is Public Image Ltd continuing to be what it has always been: an endless, enthralling exploration of Lydon’s ever-roiling mind.

Reggie Song powers along with the kind of positivity which makes Rise such a replayable cut from the PiL back catalogue: “Reginald, he is a reasonable man… he don’t see no evil! Only innocence in the garden.” Out Of The Woods closes the record with a pulsing bassline that demands that you just play the whole damn thing over again. Again Lydon sounds like a consummate storyteller, lyrics and music that do more than their constituent parts could possibly hint at. Buy this record. This is PiL. Isn’t that enough for you?