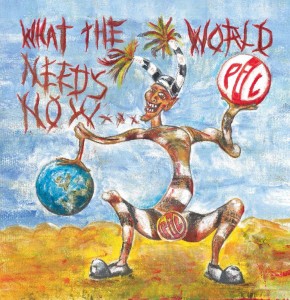 John Lydon is angry. Really angry. But what’s stoked the ire of the punk perennial this time? The fascist regime, perhaps? Or is it that we never listened to a word that he said? No, it’s worse than that. The toilet’s broken. “I repaired that, I told ya, get the plumber in again! (and again, and again, and again!!!)” This is Double Trouble, the frantic, enjoyably daft lead-off single from What The World Needs Now…, an argument with his wife used to illustrate Lydon’s continued commitment to chaos amid “domestic bliss”.

Although he may still best be known as the former face of The Sex Pistols – or at least by those not more familiar with the jungle-inhabiting reality star or butter huckster – it’s through the shifting line-ups of Public Image Ltd that John Lydon has created his most compelling (if not always consistent) work – from the cavernous basslines and grating, metallic guitars of the band’s first two releases through stark, synthesised drones to the more global, commercial scope of their less-celebrated middle age.

Funded by those somewhat infamous butter adverts, PiL reassembled in 2009, and extensive touring and live releases eventually resulted in the self-financed, defiant This Is PiL in 2012; while not quite a classic, it was definitely closer in sound and spirit to the band’s raw, reggae-inflected early work than the compromised alt-rock of Happy? and 9.

Three years on, PiL’s latest is similarly spirited and, mostly, it’s a blast. There are some weaker moments: C’est La Vie is directionless and Shoom a petulant poor cousin of Leftfield collaboration Open Up, but these are balanced by some fine up-tempo rockers that are among the best moments of the revitalised group’s output. Lu Edmonds’ guitar playing on Know Now is an effective combination of Keith Levene’s jagged dissonance and the brawnier riffing of their later work, while the tense and percussive I’m Not Satisfied sees Lydon rage against the frustration of memory loss (which he experienced after a childhood struggle with meningitis).

Contrastingly, Corporate welds jarring, clangorous Metal Box dub to a bilious tirade, while the cosmic boogie of The One has some of the crossover appeal of Rise; Bettie Page, meanwhile, has a guitar hook beamed straight from the Syd Barrett-era Pink Floyd’s Lucifer Sam. If that sounds unlikely, from the man whose ‘I Hate Pink Floyd’ t-shirt once caught the eye of McLaren and Westwood, it’s not the only time that they come to mind: the atmospheric, echoing verses of the soldier’s lament Big Blue Sky are swept away by an unexpectedly lush, widescreen chorus that wouldn’t sound too out of place on The Division Bell.

It’s an altogether bolder and more varied effort than This Is PiL – making this probably the best set to bear the band’s name since 1985’s Album – and Lydon’s voice is the star throughout, the king of punks in numerous personae: he’s pleading and booming on Big Blue Sky, needling and nasal on Double Trouble; he plays pro-wrestling announcer on Bettie Page and the classically sneering and r-rolling Rotten on Spice Of Choice. At nearly 60, John Lydon is still angry, and obviously has a lot more to say; perhaps that toilet ought to stay broken a little longer.