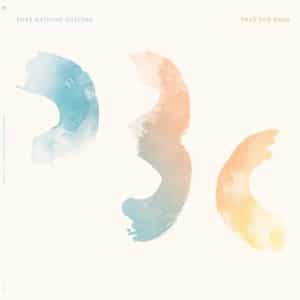 Moon Tides, the debut album by Pure Bathing Culture (Portland, Oregon duo Sarah Versprille and Daniel Hindman) was one of 2013’s most unfairly under-acknowledged releases, a collection of songs that embedded themselves firmly in your heart whilst overwhelming you with their radiant, celestial pop beauty.

Versprille and Hindman had first come together as part of Vetiver (playing on their Tight Knit and Errant Charm albums) and while on the surface this link doesn’t provide any particularly obvious points of reference (their sound is quite distanced from that Andy Cabic has laid down under the Vetiver name) it does provide some context behind Pray For Rain, namely in the confidence that runs through the album. Their decision to pursue their own musical ideas receives further, more tangible vindication on this outing.

It may not quite have the immediate irresistibility and wide-eyed innocence of its predecessor but it successfully builds on and expands the sounds previously established, something evident on opening track The Tower. It’s a strong opening that reveals that the inner-vulnerability found within their soft synths and clipped guitars is still as visible as ever.

Similar can be said of the sparkling melodic drive that engulfs the title track. Palest Pearl meanwhile sees bouncing synths get magnified into something kaleidoscopic and effervescent. The late Cocteau Twins period accents found later on Clover show that one of the most evident influences on their debut album remains pleasingly in place here. It also shows their ability to vary the pace and presence across the album whilst avoiding any adverse effect on the flow of the tracks.

Singer is defined by a more open and spacious yet not any less melodic sound before She Shakes reaffirms the glittering pop contours we’ve come to expect from them. The guitars cascade like melodic waterfalls around Versprille’s vocals which provide an evocation of the sweet intensities of falling in love. It’s possibly the best example on the album of them sticking to their own identity and avoiding drifting into an ethereal or shoegazey sound that would have been very easy to have succumbed to (especially in these Beach House-dominant times). The encouraging role of producer John Congleton has been acknowledged by the band in this respect.

Shades of Kate Bush can be detected in I Trace Your Symbol before In The Night, In The Peaceful Night brings the album to a contemplative, sparser close. It’s a demonstration of what is possible when a still-emerging band re-apply self-belief and willpower to the way they make music. It’s a process and aesthetic that should continue to serve them well.