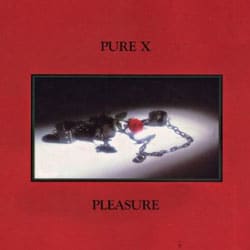 Pure X is successful for a lot of obvious reasons. Their shtick is all warbled, narcotized fuzz;amniotic guitar drones lazily clunking into each other, ultra-deliberate drums and Nate Grace’s voicehangs in a casually bewildered haunt, lagging behind the grooves, Dean Wareham-style. A recent,Hockley-Smith penned Fader feature painted the loose collaboration as a trio of friends content inaimlessness. A miniature collective of artists enjoying an elongated summer vacation – free of adulthoodresponsibilities and aggravatingly self-involved, it’s the sort of back-story common to the lo-fi popworld, but Pleasure might be the perfect articulation. Although warped and weird, it resonatestranquilization; the sort of unhinged peace that comes from being perpetually between things.

Conceptually, Pure X is anything but attached. Built from bedroom practice spaces and flexibleschedules, the songs are more like chunky, waterlogged passages, bleeding together in a curdled, butstrangely alluring sprawl. There are flickers of The Jesus & Mary Chain fuzz, Pavement slack,and Julian Lynch disfiguration. It is not an active listening experience, its tunneling, downwards-sink is probably best used to soundtrack a descent into sleep, songs for the hazy precipice betweenunconscious wanderings and pragmatic thought.

It’s actually rather hard to write critically about music like this – something that forgoes traditionalmelody for a constant drift of warm, ebony texture doesn’t really leave much room for discourse.It certainly sounds good; well-executed, well-written, and well-produced, but that’s not really thepoint. The point is the milky pedal-runs and Grace’s fossilized croon far in the distance on Heavy Air,or how the smudgy feedback-burner Easy pretty much ends halfway through, only to be picked up bya thoroughly unrelated experiment for the final third. Pleasure isn’t something to be categorized, itsounds ever-present, something that can be left on an undeterred loop without anyone’s immediateknowledge.

It’s also a little melancholy,. Some of the sparer compositions sound crushed in loneliness, while mostof the others are displaced and bored. Most of that can be charted up with the emotional and spiritualpitfalls that come from living like a thorough man-child for an extended amount of time, but like almosteverything with Pure X, it’s more complicated than that. Everything, from the downhearted pulse to theeroded guitars, sounds intriguingly environmental. The stuff is certainly ambient, but in a deeper sense– like the songs belong to the walls, to the sky, not a band. It’s one of the finer conversions of 2011,managing the delicate task of crafting a record that sounds both incomprehensibly universal, deeplypersonal, and, yes, endlessly listenable.